Youth should use science and technology to change the world 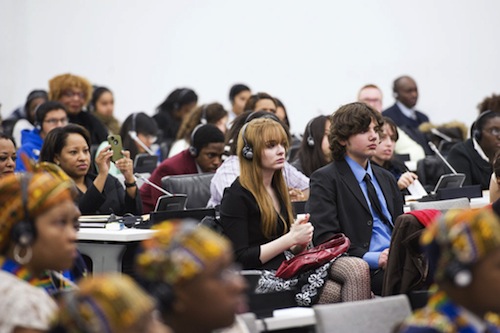 The potential of young people to use technology to make exceptional contributions to society and history is in the spotlight today at a United Nations forum, where officials are calling on future leaders to use their expertise and compassion to address the challenges facing the world.

In his opening statement, Secretary-General Ban Ki-moon encouraged participants to be “global citizens” and to help the Organizations rise to the challenges such as insecurity, climate change and unemployment by finding their own mission in life.

“Be part of creating a new vision. It is not only about telling us what kind of world you want. It is about partnering with us to realize a better future,” he told participants at the Economic and Social Council (ECOSOC) Youth Forum in New York.

Ban noted that working with youth is one of his top priorities because “young leaders have the energy and ideas we need to change our world.”

He stressed the essential role of education, adding a personal note about the power of education as he was growing up in the Republic of Korea.

“When we give children and youth the education they deserve, they will help transform the world,” he said. He also noted his new initiative, Education First, a $1.5 billion initiative to achieve universal education.

Also speaking at the opening of the forum, ECOSOC President Néstor Osorio reiterated the need to overcome obstacles on education and employment, particularly among women and girls.

Young people are three times more likely to be unemployed than adults and more than 75 million youth worldwide are looking for work, according to the UN International Labour Organization (ILO). In Europe and the Middle East, more than half of 15 to 24 year olds are without jobs.

Social networking sites, he noted, played an important role in promoting the so-called Arab Spring by “giving the youth a voice and making them an important player in the transformation of the region.” In addition, mobile phones are pushing development by allowing users to browse the Internet and transfer money wirelessly.

“Young people need economic opportunity. Young people want the full enjoyment of their political and civil rights and freedoms. Speaking their minds; participating in politics; practicing the religion of their choice; and living their lives without any form of discrimination are some of their legitimate aspirations,” Mr. Osorio said.

“Meaningful participation, openness, inclusion and accountability can be improved by using technology, science, and culture. They all can serve as a vital engine for positive change,” he added.

Some people think kids and power is a dangerous combination, Ms. Svitak said, “but the only danger is transformational change.”

She said young people are instrumental in supporting and encouraging their peers, and creating change online by toppling regimes and shifting attitudes.

Also, the Secretary-General’s Envoy for Youth, Ahmad Alhendawi, said that engaging young people in addressing global challenges is important because they are at the very fore in both using and developing tools in the field of science, technology and innovation.

“Young people are engines of growth and human development,” he said in a statement.

In a plan for change outlined by Ban, the Youth Envoy’s role encompassed four principles: participation, advocacy, partnerships and harmonization.

Fully endorsing the plan, Mr. Ban encouraged young people to communicate with the UN through the meeting places and cyberspace, such as by following the UN on Twitter (@UN) and to tweet the Envoy directly at @AhmadAlhendawi.

Meanwhile, ECOSOC is today launching a major online campaign, ‘Innovate Your Future.’ The online forum allows youth between the ages of 15 and 40 to write in their ideas and thoughts on how science, technology, innovation and culture can help shape a sustainable world.

For example, one person suggests “to come up with a solar-powered irrigation system” while another advocates “designing homes that consume less power.”

The concerns and recommendations brought forward on the site, along with the ideas from today’s forum, will be presented at the ECOSOC High-level Segment in Geneva this July for ministers from Member States.