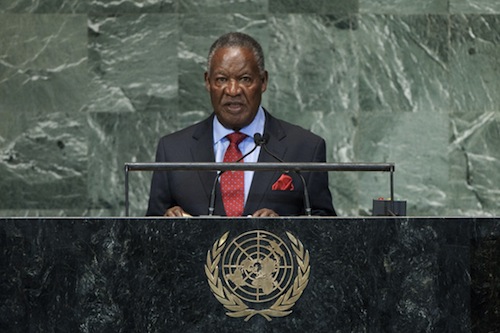 The international community must boost its efforts to help African countries achieve the anti-poverty targets know as the Millennium Development Goals (MDGs) before their deadline in 2015, the Presidents of Ghana and Zambia stressed in their statement to the United Nations General Assembly.

“As we draw closer to the deadline of the Millennium Development Goals in 2015, the international community needs to maximize its efforts towards achieving all the eight goals,” said Zambian President Michael Chilufya Sata, adding that his country is making steady progress in some of the goals.

The MDGs – which seek to slash a host of social ills, including extreme hunger and poverty, infant and maternal mortality, and lack of access to education and medical care – were agreed on by world leaders at a summit in 2000. They have a 2015 deadline for their completion.

President Sata said Zambia’s progress is visible in the education sector, with a significant increase in the net enrolment of children in primary schools, as well as in the reduction of HIV/AIDS, tuberculosis and malaria cases.

However, he pointed that other challenges remain, among them the 60.5 per cent poverty rate in the country, despite efforts to stimulate economic growth. He also noted that unemployment continues to be one of the most pressing problems for Zambia’s youth, and said his Government is looking to increase partnerships with various UN agencies and the international community to harness best practices from across the world to address this issue.

The Zambian leader also reiterated his strong support for Secretary-General Ban Ki-moon’s High level Panel on the post-2015 development agenda. The panel, which held its first meeting yesterday, is tasked with providing recommendations on a global agenda following 2015.

“We must support this high-level panel to help recoup the lost opportunities of the recent past… We are still a long way from attaining the MDGs. Discarding them entirely would be to the detriment of the poorer nations,” President Sata said. “I trust that the Secretary-General’s panel will take this into consideration.”

In his remarks to the General Debate, the President of Ghana, John Dramani Mahama, said his country is on track to achieve the MDGs, particularly in the areas of reducing extreme poverty, achieving gender parity in school enrolment, giving access to drinking water and reducing the prevalence of HIV/AIDS.

He also pointed to unemployment among youth – who makes up nearly 65 percent of the population – as one of the biggest challenges for his country, and stressed that Ghana is dealing with this problem “aggressively and as effectively as possible by finding solutions that are long-term and sustainable.”

The Ghanaian President also spoke about his country’s upcoming presidential and parliamentary elections, and assured the international community that the polls will be free, fair and peaceful. He added that current political stability is not just being experienced in his country, but also in other parts of Africa, revealing a new phase for the continent.

He added, “This type of sustained growth, in combination with security and democracy can only ensure an Africa that will bear no economic resemblance to the ghost of its former self. This new Africa will stand on the world stage as a mutual partner.”

The two African leaders are among scores of heads of State and government and other high-level officials who are presenting their views and comments on issues of individual national and international relevance at the Assembly’s General Debate, which ends on 1 October.