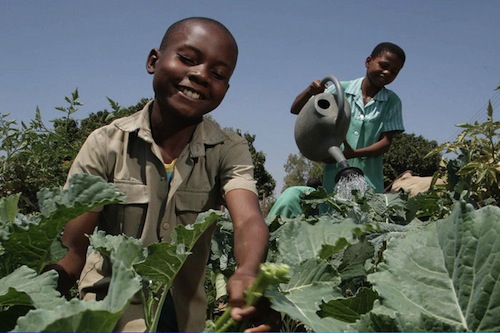 Keep children out of harm’s way, the head of the United Nations Children’s Fund (UNICEF) urged Zimbabweans, who head next week to the polls in a constitutional referendum and later this year in general elections.

“At times of great uncertainty, such as during an election, it is important that homes, communities, and schools continue to be havens of safety for children and that they have uninterrupted access to basic social services,” UNICEF Executive Director Anthony Lake said in a press release.

“Children are not political and should be sheltered, in all countries, from political turbulence,” he stated.

Speaking at the end of a two-day visit to the southern African country, Lake wished Zimbabweans a peaceful election, saying it was everybody’s duty to ensure that children and women suffered no violence and disruption to their lives during the 16 March referendum and later general elections.

The referendum will decide a new constitution which, if adopted, will pave the way for elections after June when the current presidential and parliamentary terms expire.

Last month, independent UN experts urged Zimbabwean authorities to ensure that fundamental rights are respected in the run up to the referendum, following reports of civil society organizations being subjected to searches, harassment and intimidation by the police.

While in Zimbabwe, Lake met with Prime Minister Morgan Tsvangirai and acting Minister of Foreign Affairs Nicholas Goche, and welcomed their assurances on the protection of children.