Posted on: March 30th, 2013 by AlYunaniya Staff No Comments 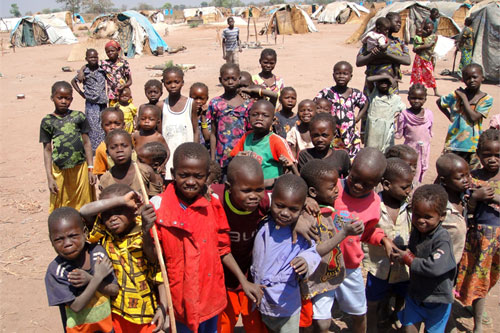 Two million children in the Central African Republic are without basic social services and are exposed to violence following a power grab by the Séléka rebel coalition and subsequent insecurity and looting, the United Nations Children’s Fund (UNICEF) today said, warning that more children will be at risk if the country does not stabilize quickly.

“Children in the Central African Republic were some of the most vulnerable in Africa even before the recent upsurge in fighting,” said Manuel Fontaine, UNICEF’s Regional Director.

“It is imperative to have full and secure access to communities affected by the conflict. With every lost day, every thwarted delivery and every stolen supply, more children may die,” Mr. Fontaine warned.

At least 4.1 million people, almost half of whom are children, are now directly affected by the crisis, which includes not being able to attend schools or getting enough to eat, UNICEF estimated in today’s news release. Since December, 1.2 million people have been cut off from essential services.

Earlier in the week, the UN agency said ten metric tonnes of emergency supplies were stolen from its main warehouse. The supplies included water kits, blankets, mosquito nets, plastic sheeting, and essential medicines and nutrition items for 30,000 of the most vulnerable people, specifically children and women, in the coming days and weeks.

UNICEF reiterated its calls today on all parties in the conflict “to immediately stop the looting of humanitarian supplies, to ensure free and secure access of humanitarian actors to those in need, and to ensure that all involved respect humanitarian principles, human rights and the rule of law.

The time has come for the Séléka coalition “to really demonstrate how committed it is to humanitarian principles and human rights for all Central Africans,” said Mr. Fontaine.

“The needs and rights of children must be the priority for the new Government,” he added.

UN agencies, funds and programmes, including UNICEF, slimmed down their activities in CAR this week due to the insecurity, but still have a presence in the country.