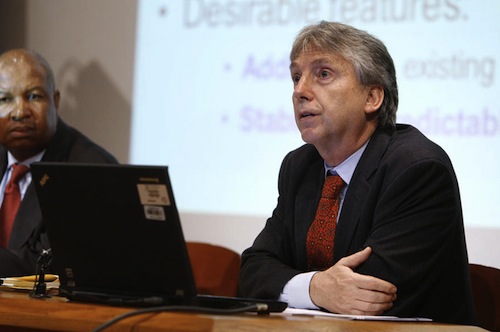 In a major report, the United Nations today proposed a series of financial mechanisms to raise $400 billion annually for development needs, as many donor countries have cut back their assistance funding due to the global economic crisis.

“Donor countries have fallen well short of their aid commitments and development assistance declined last year because of budget cuts, increasing the shortfall to $167 billion,” the lead author of the World Economic and Social Survey 2012: In Search of New Development Finance, which contains the proposals, Rob Vos (photo), said in a news release.

“Although donors must meet their commitments, it is time to look for other ways to find resources to finance development needs and address growing global challenges, such as combating climate change,” he added. “We are suggesting various ways to tap resources through international mechanisms, such as coordinated taxes on carbon emissions, air traffic, and financial and currency transactions.”

Produced by the UN Department of Economic and Social Affairs (DESA), this year’s issue of the annual report on global development found that development aid declined in real terms in 2011, highlighting the need for additional and more predictable financing from new sources.

The report notes that while existing initiatives to fund programmes in the developing world have been successful, the scope for scaling them up or replicating them is too limited to meet the needs for developments financing in the next coming decades, and new funding sources need to be tapped.

Some of the new mechanisms to raise funds which were identified in the report include a tax on carbon dioxide emissions in developed countries, a tiny currency transaction tax, and earmarking a portion of the proposed European Union financial transaction tax. These measures would yield substantial revenues of $250 billion, $40 billion and $71 billion per year, respectively, for international cooperation.

“Such taxes also make economic sense, as they help stimulate green growth and mitigate financial market instability. In short, such new financing mechanisms will help donor countries overcome their record of broken promises to benefit the world at large,” said Mr. Vos, who serves as the Director of DESA’s Development Policy and Analysis Division.

According to DESA, a financial transaction tax (FTT) would also help to reduce the profitability, and thus the volume, of computer-operated high-frequency trades, which can be disruptive to equity markets. In addition, the tax would not be felt by non-financial customers and would fall on a sector that is not heavily taxed already.

“The FTT is a progressive tax inasmuch as poor people engage in relatively few transaction with financial institutions and the rich engage in many,” DESA states in briefing note on the potential of FTTs. “Financial and currency transaction taxes are technically feasible and economically sensible. They could readily provide the means of meeting global development financing needs.”

The World Economic and Social Survey 2012: In Search of New Development Finance also notes that current financing resources in many low-income countries have focused on allocating funds to fight specific diseases such as HIV, tuberculosis and malaria, and that while this has brought benefits for disease control, it has also contributed to the fragmentation of health systems in these countries.

The report concludes that it would be better to find new resources for a “global fund for health” which would support the improvement of countries’ overall health systems.