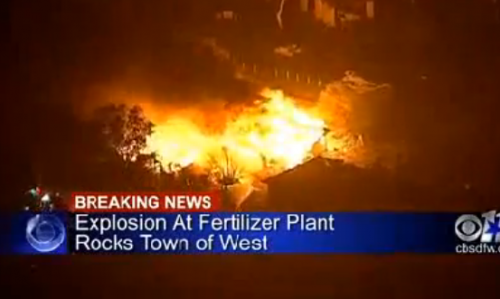 A huge explosion at a fertiliser plant near Waco in the US state of Texas has left as many as 60 to 70 dead, scores of people injured and others are trapped in burning buildings, according to local media.

However, a spokesman for the Texas Department of Public Safety, D.L. Wilson, told Reuters the blast had resulted in “probably hundreds of casualties,” without confirming the exact number.

He added that a nearby nursing home collapsed from the explosion and that people were believed to be trapped inside.

Governor Rick Perry issued a statement saying: “We are monitoring developments and gathering information as details continue to emerge about this incident. We have also mobilized state resources to help local authorities. Our thoughts and prayers are with the people of West, and the first responders on the scene.”

The explosion comes two days days after the United States deadly explosions  hit the Boston marathon on Monday killing three people and wounding more than 100 others.