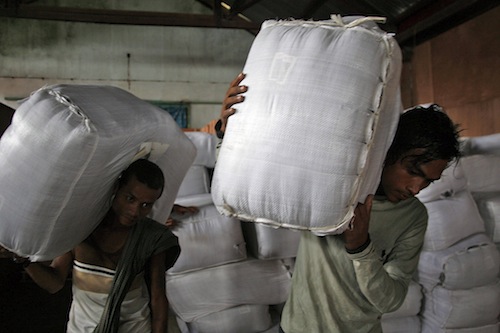 An ILO study has offered a rare glimpse into the hardships endured by workers from some of the world’s poorest countries while also examining the structural hurdles to protecting their rights at work in the Middle East.

Based on more than 650 interviews conducted over a two-year period in Jordan Lebanon, Kuwait and the United Arab Emirates, the study Tricked and Trapped: Human Trafficking in the Middle East sheds light on the situation of trafficked adult workers in the Middle East, the complex processes by which they are ‘tricked and trapped’ into forced labour and sexual exploitation, and the constraints that prevent them from leaving.

It also examines the responses to human trafficking recently put in place by governments, employers’ and workers’ organizations and other stakeholders and provides regional policymakers with recommendations to help them effectively counter the phenomenon.

The Middle East hosts millions of migrant workers, who in some cases exceed the number of national workers substantially. In Qatar, for example, 94 per cent of workers are migrants, while in Saudi Arabia that figure is over 50 per cent. In Jordan and Lebanon migrants also make up a significant part of the workforce, particularly in the construction and domestic work sectors.

“Labor migration in this part of the world is unique in terms of its sheer scale and its exponential growth in recent years,” says Beate Andrees, Head of the ILO’s Special Action Programme to Combat Forced Labour. “The challenge is how to put in place safeguards in both origin and destination countries to prevent the exploitation and abuse of these workers.”

Although data is scarce, the ILO estimates that there are 600,000 forced labor victims in the Middle East.

The report singles out the Kafala (sponsorship) system – which governs the lives of most migrant workers in the Mashreq and GCC countries – as “inherently problematic” because it creates an unequal power dynamic between the employer and the worker.

It points to deficits in labour law coverage that “reinforce underlying vulnerabilities of migrant workers” as well as significant gaps in national legislation that “restrict the ability of migrant workers to organize, to terminate their employment contracts and to change employers.”

It notes that the lack of inspection procedures maintains the “isolation of domestic workers in private homes” and heightens their vulnerability to exploitation. It also highlights the “real” risks of detention and deportation for workers who are coerced into sex work in the entertainment industry.

Reforming the Kafala system would significantly improve labor migration governance in this regard.

The report proposes empowering ministries of labor to oversee recruitment processes, to handle complaints by migrants and employers, and to verify allegations of mistreatment and respond accordingly as a viable alternative to the Kafala.