Posted on: October 21st, 2012 by Romana Turina No Comments 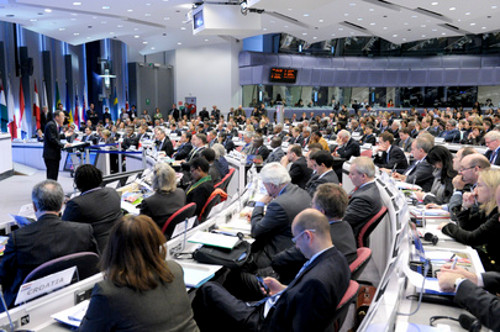 To mark the 6th EU Anti-Trafficking Day, the Cyprus EU Presidency and the European Commission organised a high level conference in Brussels on 18th October 2012.

On this occasion, high-level policy makers, government officials from all EU Member States, representatives of civil society organisations, experts, front line workers, as well as artists and the media, reflected on how to best work together towards the eradication of trafficking in human beings.

Trafficking in human beings takes many different forms; people can be sold for sex, labour in agriculture, construction, or the textile industry, or forced into domestic labour. It is a severe human rights violation rooted in vulnerability to poverty, lack of democratic cultures, gender inequality, conflict and post-conflict dynamics, lack of opportunities and employment, lack of access to education, child labour and discrimination.

As findings demonstrate this kind of trafficking constitutes a very lucrative form of crime that generates profits of dozens of billions of Euro; and the business is not decreasing. According to the ILO Global Estimates Report of June 2012 on forced labour, the total number of victims of forced labour worldwide is estimated at 20.9 million, of whom 880,000 are in the EU.

Data collected by Eurostat for the years 2008-2010 demonstrate that 75% of registered victims were trafficked for sexual exploitation, forced begging, or domestic servitude. Twenty-one EU Member States were able to give gender-specific information, according to which women and girls are the main victims of trafficking in human beings. Female victims accounted for 79 per cent and male victims for 21 per cent. EU Member States reported that most of the registered victims within the EU come from Romania and Bulgaria, while victims from non-EU countries tend to originate from Nigeria and China.

Trafficking in human beings is specifically prohibited under Article 5 of the Charter of Fundamental Rights of the European Union, but more needs to be done on a legal level. As for now, the Member States of the Union declared their political commitment on preventing and combating trafficking in human beings when they signed Directive 2011/36/EU; the first EU criminal law instrument under the Lisbon Treaty. This EU level legislation is expected to have an appreciable impact once fully adopted by the Member States by 6 April 2013.

On an procedural note, the conference comprised two main sessions. The first session focused on actions needed for the next five years in all different fields related to trafficking in human beings. It focused on strengthening partnerships, including new actors working in the field, identifying innovative approaches for referring victims, and investigating cases of trafficking in human beings. The first year results of the Joint Statement signed by the Heads of the EU Justice and Home Affairs agencies at the 5th EU Anti-Trafficking Day were also presented. As well as the Eurojust Action Plan against Trafficking in Human Beings 2012-2016.

The second session was dedicated to a more in-depth discussion on particular topics, to be discussed in three working groups selected on the basis of the EU Strategy priorities on Prevention, Prosecution, and Protection/Assistance, respectively: 1) reduction of demand (and supply) as key in preventing trafficking in human beings; 2) financial investigations; and 3) EU Transnational Referral Mechanisms.