Abbas to seek non-membership status for ‘Palestine’ on September 27 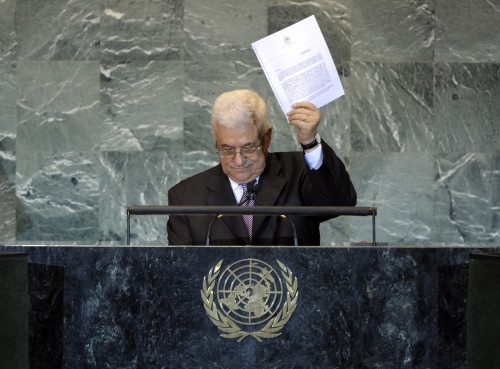 Palestinian president Mahmoud Abbas confirmed on Saturday he will apply on September 27 to obtain non-member status at the United Nations.

“We will go to the UN General Assembly for consultations with our friends on the draft resolution calling for the upgrade of Palestine (to non-member status)” in the United Nations, Mr Abbas said in a televised speech in Ramallah.

“We are going to the UN to say that we are a state which applies the fourth Geneva convention. There are 133 countries that recognise us as a state with east Jerusalem as its capital and where we have embassies raising the Palestinian flag.”

The Palestinians are currently a UN observer “entity” with no voting rights. PA minister of Foreign Affairs Riyad al- Malki told reporters last month that Mahmoud Abbas will ask for non-member observer status at the U.N General Assembly in his speech in late September, an upgrade they expect to establish the West Bank, Gaza and east Jerusalem, captured by Israel in 1967, as Palestinian territories.

A simple majority vote in the 193-member General Assembly would be enough to grant Palestinians non-member observer status, bypassing the Security Council where the United States, Israel’s ally, has previously threatened to veto the bid.

The United States and Israel argue that a Palestinian state can only be established in negotiations with Israel. However, Israeli-Palestinian have been stalled since 2008.

A few weeks ago,Palestine Liberation Organisation (PLO) executive committee member, Saleh Raafat, said Washington was pressuring the Palestinian leadership to postpone its upgrade plans until after the US elections in November.

Meanwhile, Abbas held the Hamas Islamist group ruling Gaza responsible for the failure of national reconciliation efforts during his speech.  “Reconciliation means elections, and wanting to establish an independent emirate in Gaza is not going to work,” Abbas said.

He added that those who dealt with Haniyeh as a prime minister were deepening divisions among the Palestinians, the PA president said. “Ismail Haniyeh is not the prime minister,” he said, referring to Haniyeh’s visit to Mohamed Mursi in Cairo.

During his speech Abbas also said that government employees would not receive full salaries in October because donor countries have not delivered promised aid they have promised, leaving the Palestinian Authority that governs much of the West Bank in a budgetary shortfall that has contributed to rising prices and delays in the payment of government salaries, according to Haaretz. The economic situation has sparked demonstrations in the West Bank.