Action on climate change crucial to water and food security 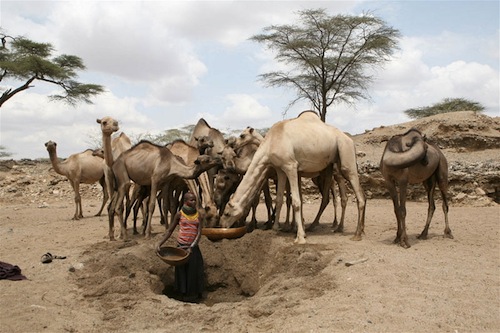 Secretary-General Ban Ki-moon called again for urgent and concrete action on climate change, as high-level officials gathered at the United Nations to discuss the growing global concern over the impacts of the phenomenon on food and water security.

“Action on climate change remains a major piece of unfinished business,” Mr. Ban told an event hosted by Qatar on the sidelines of the General Debate of the 67th session of the General Assembly.

Last December, Member States agreed to reach a legally binding agreement on climate change by 2015, he said, referring to the decision taken by the 194 parties to the UN Framework Convention on Climate Change (UNFCCC) at their conference in Durban, South Africa.

“Two days ago I called on Member States to make good on this promise. Time is running out on our ability to limit the rise in global temperature to 2 degrees centigrade.”

It is vital for everyone to work together to make the upcoming UN Climate Change Conference, to be held in the Qatari capital of Doha from 26 November to 7 December, “a major stepping stone to a global, robust and legally binding climate regime,” said Ban.

The world, he said, is witnessing the highest levels of emissions ever; the Arctic sea ice is again at an all-time low; and it is another record year for wild fires, droughts and flooding. Climate change is making weather patterns both extreme and unpredictable, contributing to volatility in global food prices, which means food and nutrition insecurity for the poor and the most vulnerable.

The Secretary-General has made food security a top priority through the Zero Hunger Challenge he launched at the UN Conference on Sustainable Development (Rio+20), held in Brazil in June.

The initiative aims for a future where every individual has adequate nutrition and where all food systems are resilient. Its five objectives are to make sure that everyone in the world has access to enough nutritious food all year long; to end childhood stunting; to build sustainable food systems; to double the productivity and income of smallholder farmers, especially women; and to prevent food from being lost or wasted.

Ending hunger will mean climate-smart, climate-resilient agriculture, as well as policies that are water-smart, energy-efficient, and that promote inclusive green growth, Ban said.

“But our efforts will come to naught if we don’t work together to slow down the carbon emissions that are warming the planet,” Ban stated.

“The emission reduction targets of the new Kyoto treaty are not sufficient – we know that – but they are necessary starting point from which to build a future global agreement by 2015,” he stated.

It is also important to address the gap between fast-start finance and long-term finance so that by 2020 climate finance is being mobilized at the agreed level of $100 billion a year, he said, calling for accelerating efforts to make the Green Climate Fund, approved last year in Durban, fully operational.

“This is the path to water and food security,” he stated.