Posted on: November 11th, 2012 by AlYunaniya Staff No Comments 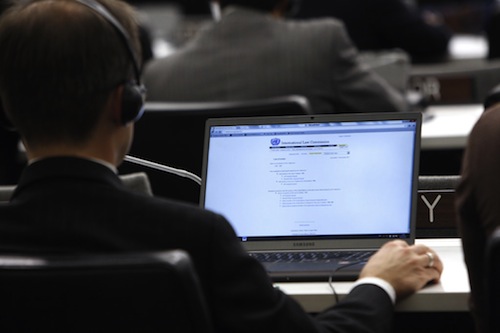 Helping developing countries build their citizens’ access to the Internet is akin to giving them a tool that boosts their chances of achieving sustainable economic growth, a senior United Nations official told a global meeting on Internet governance.

“The Internet offers a lot of potential and opportunities for sustainable development,” said the Director of the Division for Public Administration and Development Management of the UN Department of Economic and Social Affairs (DESA), Haiyan Qian.

Qian’s remarks, delivered on her behalf, were addressed to more than 1,600 delegates from 128 countries at the conclusion of a four-day conference of the Internet Governance Forum (IGF) in Baku, the capital of Azerbaijan.

The theme for this year’s Forum was ‘Internet Governance for Sustainable Human, Economic and Social Development,’ reflecting the increasing role of the Internet in the evolution of the various aspects of development, across all countries.

“We need to build capacities to address challenges and implement strategies, not only in our own countries and organizations, but also to assist others, especially those in developing and the least developed countries, as well as countries with economies in transition,” Qian urged.

The question of promoting sustainable development – which aims to meet human needs through resource-use that also preserves the environment – was central to the landmark UN Conference on Sustainable Development (Rio+20), which took place in Brazil in June this year.

One of the main Rio+20 outcomes was the agreement by member States to launch a process to develop a set of Sustainable Development Goals, which will build upon the anti-poverty targets known as the Millennium Development Goals (MDGs) – set in 2000 for achievement by 2015 or earlier – and converge with the post-2015 development agenda.

In her remarks, Ms. Qian said IGF’s “inclusive, participatory and transparent governance process” plays a “critical role” in driving the growth of the Internet, which she said was “clearly” bringing new social and economic opportunities to so many people in the developing world.

“This session of the IGF has again provided the valued platform for continuous consensus building and learning opportunities for all,” she said. “I am sure each one of us will bring back to our respective countries and organizations new ideas and approaches on how we can best deal with these crucial issues.”

The forum emerged after 2005, when countries attending the second of two conferences of the UN-sponsored World Summit on the Information Society asked the UN Secretary-General to convene a new space for dialogue on Internet governance policy. Though not a decision-making body, it saw its initial five-year mandate renewed for a further five years by UN General Assembly.

IGF noted that activist groups drawn from civil society had demonstrated an “appetite to drive (the) global Internet agenda by attending the Baku conferences annual meeting in relative force.

IGF said participation of women also increased significantly from previous years, and cited youth representation and activity as a “notable achievement” of this year’s meeting.

Several dozen experts and panellists participated in the gathering from remote hubs around the world – a development IGF said had become a “major strength” of the forum process. It also highlighted the rising use of social media platforms by delegates, noting that their use spiked “significantly” – enabling discussion to continue beyond the meeting rooms.

“There were thousands of ‘Tweets’ about the forum each day, which reached millions of others on the social information-sharing network,” IGF said.

The forum concluded on a day the UN Educational, Scientific and Cultural Organization (UNESCO) also highlighted the importance of communications for advancing development. The Paris-based agency did so in remarks delivered at UN Headquarters in New York to the UN General Assembly’s Second Committee, which deals with economic and financial matters.

“UNESCO approaches the issue of communication-in-the-service-of-development from the vantage point of fostering an environment in which freedom of expression, independence and pluralism of the media can exist,” UNESCO’s Senior Public Information and Liaison Officer in New York, Suzanne Bilello, told the committee, which is open to all 193 UN Member States.

“Of particular interest to us therefore is the need to ensure that the communication-for-development agenda gives sufficient emphasis to promoting free, independent and pluralistic media, whether on radio sets, mobile phones or printed pages, and including access to communication channels, such as community media, and not forgetting, also, the importance of media and information literacy,” she said.

Bilello added that, without progress in all those parameters, “societies cannot advance more specific practices, like health or agricultural communication, to optimum effect and participation by poor and marginalized people.”