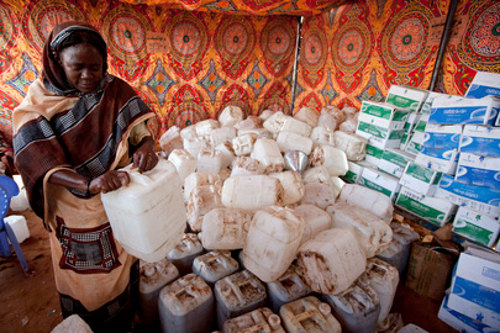 With as many as 19 million people living with the threat of hunger in Africa, it comes as a surprise that food can not move more freely between African countries, expecially from fertile areas to those where communities are suffering food shortages.

The new World Bank report Africa Can Help Feed Africa: Removing barriers to regional trade in food staples says that Africa’s farmers can potentially grow enough food to feed the continent if countries remove cross-border restrictions on the food trade within the region. According to the Bank, the continent would also generate an extra US$20 billion in yearly earnings if African leaders can agree to dismantle trade barriers. The report was released on the eve of an African Union (AU) ministerial summit in Addis Ababa on agriculture and trade.

According to the report, rapid urbanization will challenge the ability of farmers to ship their cereals and other foods to consumers if the nearest trade market is across a national border.

“Africa has the ability to grow and deliver good quality food to put on the dinner tables of the continent’s families,” said Makhtar Diop, World Bank Vice President for Africa. “However, this potential is not being realized because farmers face more trade barriers in getting their food to markets than anywhere else in the world. Too often borders get in the way of getting food to homes and communities which are struggling with too little to eat.”

The new report states that if the continent’s leaders can embrace a more dynamic inter-regional trade, Africa’s farmers could potentially meet the continent’s rising demand and benefit from a major growth opportunity. It would also create more jobs in services such as distribution, while reducing poverty and cutting back on expensive food imports.

Moreover, the new report notes that only five percent of all cereals imported by African countries come from other African countries while huge tracts of fertile land, around 400 million hectares, remain uncultivated.

In Africa, also poor roads blunt progress. What is more, transport cartels are still common across Africa, and there are no incentives to invest in modern trucks and logistics. The World Bank report suggests that countries in West Africa in particular could halve their transport costs within 10 years if they adopted policy reforms that spurred more competition within the region.

Other obstacles to greater African trade include export and import bans, restrictive rules of origin, and price controls. These policies are also poorly communicated to traders and officials; and this process in turn promotes confusion at border crossings.

Authorities are called to promote the establishment of a competitive market which will enhance food production and food distribution networks. The reports notes that competitive food market will help poor people the most. A good food distribution networks would benefit poor farmers and poor consumers and avoid, for example, that poor people in the slums of Nairobi pay more for their maize, rice, and other staple food than wealthy people pay for the same products in local supermarkets.

“The key challenge for the continent is how to create a competitive environment in which governments embrace credible and stable policies that encourage private investors and businesses to boost food production across the region.” said Paul Brenton, World Bank’s Lead Economist for Africa and principal author of the report.

For the time being, the World Bank Group’s continues to support trade and agriculture in sub-Saharan Africa. The Bank is recognized as a key source of knowledge on trade policy issues, analysis and investments for trade-related infrastructure at the country level.

The institution’s agriculture support for Africa has grown significantly over the past decade. The share of trade-related lending in total Bank lending, for example, has grown from an average of two percent in FY03 to five percent in FY12. New trade-related commitments in FY13 are expected to increase to US$3 billion, 70 percent of which will go to Africa.