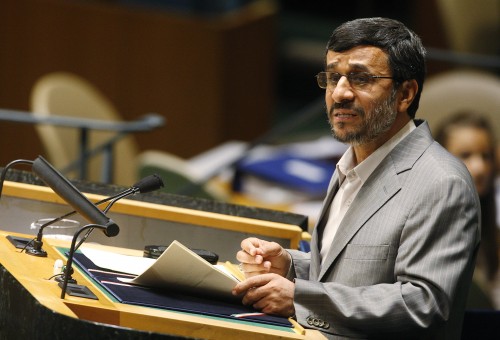 Mahmoud Ahmadinejad has arrived in Cairo, the first visit to Egypt by an Iranian president since Iran’s Islamic revolution in 1979.

Ahmadinejad was welcomed by President Mohamed Mursi at the Cairo airport, as he is set to attend a summit of the Organisation of Islamic Co-operation (OIC).

The OIC Summit will be inaugurated in Cairo on Wednesday during which Iran, as president of the Non-Aligned Movement (NAM) will follow up problems facing the members states.

On the sidelines of the summit, Ahmadinejad is due to meet with Al-Azhar Grand Sheikh Ahmed al-Tayyeb Tuesday.

Talking to IRNA in Berlin at the end of his three-day visit to Germany, Iranian Foreign Minister Ali Akbar Salehi said,

“Relations with Egypt have consistently expanded since the popular revolution in that country and this stems from the will of both peoples.”

He highlighted the good political ties between the two countries and their cooperation on the international scene, such as the Syrian crisis.

Egypt has responded cautiously to Iranian efforts to restore ties since Mursi took power in 2012, with the two nations adopting opposing stances on the Syrian crisis.

In June, Mursi denied giving an interview to Iran’s Fars news agency which had quoted him as expressing interest in restoring the long-severed ties between the countries. Mursi’s spokesperson said the interview never took place and that Mursi would file a lawsuit against the news agency, according to Reuters.

Iran has hailed the victory of Mursi, who resigned from the Muslim Brotherhood when he was elected in June, as an “Islamic Awakening”. Mursi, however, is struggling to assure Egypt’s Western allies cautious at the prospect of Islamist rule, and Gulf states that are deeply suspicious of Iranian influence, according to Zawya.