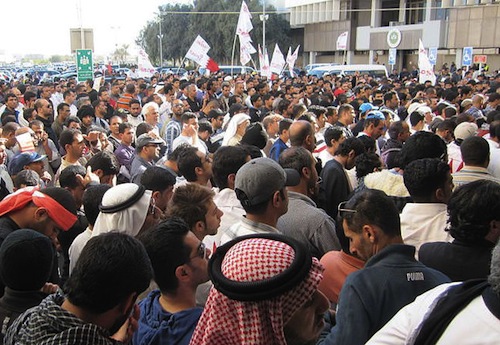 The arrest of the prominent opposition leader Khalil al-Marzouq in Bahrain  is the authorities’ latest move to tighten the noose on political opposition in the country and silence anyone seen to be critical of the authorities, Amnesty International said.

“Khalil al-Marzouq is a prisoner of conscience, imprisoned only for of his vehement criticism of the government. He must be immediately and unconditionally released,” said Hassiba Hadj Sahraoui Middle East and North Africa Deputy Director at Amnesty International.

“His arrest is yet another blow to the National Dialogue which the Bahraini authorities have been flaunting as a reason to cancel the visit of the UN expert on torture to the country. However harsh his speech towards the authorities, he should not have been arrested for expressing his views.”

Khalil al-Marzouq, the Assistant Secretary General of al-Wefaq, the registered political association representing the majority Shi’a population in Bahrain, and former Head of the Legislative and Legal Committee in parliament, was arrested on 17 September.

He was interrogated by the Public Prosecutor in the presence of a lawyer for seven hours.

Khalil al-Marzouq has been charged with incitement to violence after he gave speech critical of the government on 6 September at a political rally attended by nearly 6,000 people near the village of Saar. During the speech a masked man passed near the podium and gave him a white flag which Khalil put aside. The flag allegedly symbolises the “14 February Movement”, a loose network of youth groups established in 2011 which has called for the end of the monarchy. Some of the movement’s members are on trial, accused of using violence.

Amnesty International has reviewed the video of the 6 September speech by Khalil al-Marzooq and the flag incident, but does not believe there is any incitement to violence in them.

The Public Prosecution ordered Khalil al-Marzouq’s detention for 30 days pending an investigation. If convicted he faces a lengthy jail sentence and the possibility of his nationality being revoked.

Khalil and al-Wefaq have repeatedly stated that they are against the use of violence and are committed to achieving change through peaceful means.

“Over recent months, the Bahraini government has increased its threats and attacks against political associations which are critical of the government, in particular al-Wefaq. This must stop and Bahrain’s allies can no longer hide behind the National Dialogue to mute their criticisms under the pretext that it could derail the process,” said Hassiba Hadj Sahraoui.

This latest arrest comes only days after a joint statement by the Office of the High Commissioner for Human Rights on the human rights situation in Bahrain, signed by 47 countries, expressed concerns about the ongoing human rights violations in Bahrain.

As a response to Khalil al-Marzooq’s detention and other serious ongoing human rights violations the political opposition associations have today announced their decision to suspend their participation in the National Dialogue which had just resumed after two months of summer break.

In July the King issued several decrees which, among other things, banned demonstrations, sit-ins and public gatherings in Manama indefinitely and toughened punishments laid out in the 2006 anti-terrorism legislation. In early September the Minister of Justice issued a decree adding new restrictions on political associations. Political associations must now notify the Ministry of Justice three days before any meeting with a foreign diplomat and must take place in the presence of an official from the Ministry of Foreign Affairs.