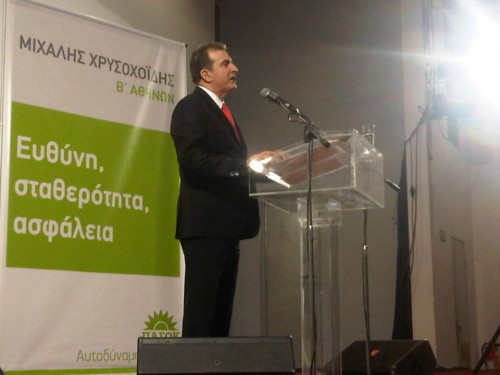 On Sunday, the first 56 immigrants were brought to the Amygdaleza detention camp in northwest of Athens, which started operating on Sunday,a week before the May 6 elections, according to Kathimerini.

Despite reaction by local residents and rights groups, with the transfer of dozens of migrants detained over the past few days in police sweeps in central Athens, were transferred to Amygdaleza center.

Police said they transferred a group of 56 migrants in the early afternoon and were to move another 164 into the center late last night.

Residents staged a protest against the center outside the police training school which is adjacent to the facility, Kathimerini reported

Dozens more are expected at the camp in the next few days, which can will be housing 1,200 people unitl mid-May, according to Citizens’ Protection Minister Michalis Chrysochoidis.

Amygdaleza is the first of about 30 camps that Greek officials say will be built by mid-2013. It consists of dozens of containers that were originally set up to house people hit by natural disasters such as earthquakes.

The minister noted, in a posting on his Twitter account Sunday, that the opening of the first facility was a success. “With Amygdaleza we have proven that a government can and should work even a few days before elections,” he said

“The biggest lesson learned from the current humanitarian crisis in the center of Athens is that governance without political costs-that is trying to fool the world by ignoring the problems of keeping everyone happy, all come back to you in the future,” said Michalis Chrysochoidis referring to the opening of the first Restricted Hospitality Center in Amygdaleza.