Posted on: August 24th, 2012 by AlYunaniya Staff No Comments 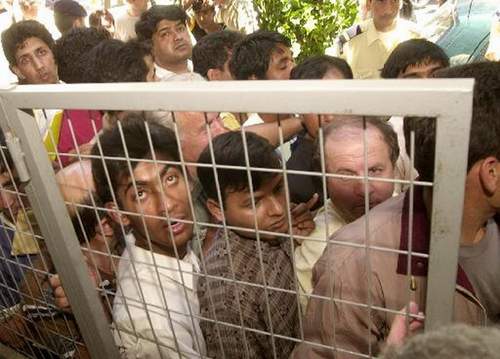 Protests broke out in Corinth when some 200 illegal immigrants were transferred to an army camp in Corinth Thursday, signifying the treatment was too lenient.

The immigrants were transferred to the camp after they were arrested early morning in the context of a sweep operation code-named “Xenios Zeus”.

Amid local protests to the former barracks of the 6th Infantry Regiment in Corinth being used as a migrant detention centre, supporters of Golden Dawn clashed with police in an attempt to block them from entering the camp with arrested illegal immigrants.

In a statement issued by the party it said it opposed military facilities being used as “tourism centers for illegal immigrants.”

Golden Dawn MP Ilias Kasidiaris stressed that the only possible solution to the issue of illegal immigration is deportation.

ANA reported the protest was led by Golden Dawn MP Efstathios Boukouras, who placed himself in front of a truck carrying migrants.

Nearly 11,000 undocumented immigrants have been brought to the Corinth military camp since the beginning of August, according to Kathimerini, adding that almost 2,000 of those people have been arrested.

Meanwhile, local Mayor Alekos Pnevmatikos also objected  the transfer of the migrants to the army camp. According to To Vima, the Corinth Municipality cut off the camp’s water supply and is refusing to collect its garbage.

A municipal council meeting took place late last night to discuss the issue, with episodes continuing outside between Golden Dawn members and police.

An estimated 100,000 people from Asia, Africa and the Middle East pass though Greece to reach the European Union every year. But anti-immigrant sentiment is growing as Greece faces a major economic crisis.