Posted on: February 25th, 2013 by Romana Turina No Comments 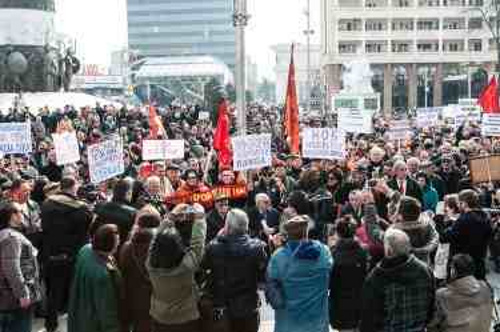 The fact that the anti-fascist protest that took place on February 16 in the centre of Skopje, and commemorated  the Campaign of 1944 -  when partisans belonging to former Yugoslavia  marched through the snowy mountains to give a decisive blow to the fascist forces in Northern Greece, is a clear sign that revisionism is currently winning in Skopje.

Nevertheless, World War II veterans and their supporters protested against the forced neglect of the Allied Forces’ achievements and the continuous harassment of the veterans’ organization by the current government at all levels.

Media expert Roberto Belicanec shared with Filip Stojanovki of GlobalVoices that government spokesmen insist on how the state has invested in the creation of cultural heritage with the building of monuments such as the one to Metodija Andonov Čento. Belicanes argues that the idea of creating cultural heritage reveals the kind of ideological operation the state is investing in: the reshaping of history and erasing of all that does not fit within its world view. The monument to Čento is an example: he was murdered and “now every opportunity is used for his symbolical killings,” says Belicanec. “The day of the protest, the television showed images of Čento  because he is selected by the ruling party to demonstrate some connection to the national liberation war  as he was not a communist, but participated in the communist-led movement,” he commented.

More has happened. In December 2012, the veterans’ organization was thrown out of their premises through a controversial court order. Further on, the city government tried to stop the February 16th protest by denying permission to use the public square. The protesters decided to march anyway to continue the tradition of the original February march.

On the day of the protest,  instead of covering the protest, the major pro-government media, such as SITEL TV, propagated a government announcement declaring their respect for the heritage of the World War II.

According to the latest U.S. State Department report on Human Rights Practices,  the most important human rights problem in FYROM is the government’s failure to fully respect the rule of law, which is reflected in its interference in the media, selective prosecution of political opponents of the country’s leaders, and significant levels of government corruption.