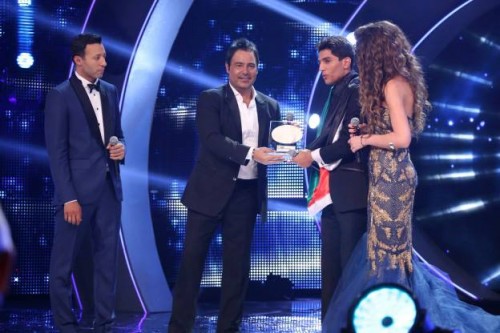 “Filippo Grandi, Commissioner General of the United Nations Relief and Works Agency (UNRWA), has named 23-year-old Mohammad Assaf as the first UNRWA Regional Youth Ambassador for Palestine Refugees. This follows Mohammad winning the Arab Idol crown and reflects his personal commitment to Palestinian refugees and to UNRWA,” the UN agency said in a statement.

A diplomatic source in Beirut, where MBC’s Arab Idol is filmed, told Maan news agency the agreement was signed days ago to make Assaf the first-ever Palestinian refugee to become a UN ambassador.

The performer from the Gaza Strip which has become an audience favorite for singing about the troubles of Palestinians under Israeli occupation Accepting his appointment as Youth Ambassador, said: “I’m truly honoured to become an Ambassador for Palestine refugees. All my good memories of the UNRWA school in Khan Younis in Gaza, where I had the opportunity to study and grow, are still very fresh. Being a young refugee myself, I can understand better than anybody else the challenges and the opportunities before us. I’m committed to doing my very best to help UNRWA succeed in giving other young people like me the same chance.”

Thousands of Palestinians across the West Bank and Gaza celebrated in the streets late Saturday.

The first Palestinian to win Arab Idol, Assaf was born to Palestine refugee parents in Libya. He returned to the Gaza Strip with his family at age 4 and was raised largely in the refugee camp in Khan Younis. He has described himself as a “son of Palestine” and a “son of UNRWA”: his mother is an UNRWA teacher, and he himself was educated in UNRWA schools.