Posted on: February 22nd, 2013 by Julie jalloul No Comments 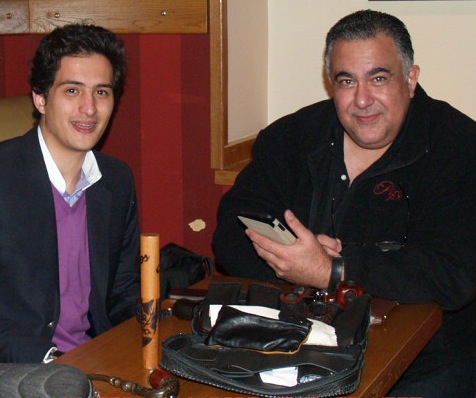 Members from the Amman Pipe Club of Jordan and the Greek Pipe club raised their pipes in a salute to their pipe smoking brothers around the world.

Puffing softly from an elegant antique pipe, 21 year-old Hikmat Mihyar, executive member of the Amman Pipe Club in Jordan and organizer of the event says pipe smokers get together on February 20 around the globe to celebrate the noble art of pipe smoking and the close fraternity of briar lovers across all borders.

“It is a day to celebrate the relaxation and community that surrounds the hobby of smoking a pipe,” he adds.

Hikmat who has recently moved to Greece for studies decided to become a member of the Greek Pipe club as soon as he arrived to Greece almost one year ago.

His love for pipe smoking led him to instantly search for the Greek Pipe club. “I found out about the club by searching online. I contacted them and met them.”

Even though he doesn’t speak Greek well he describes how his love for pipes sees no cultural and linguistic barriers.

Since its inception in 2007, the Greek Pipe club has gathered each month in various places to talk and share their passion for smoking a pipe, a hobby like any other, founding member of the Greek Pipe Club, Argiris Kotsis says.

The Greek Pipe club counts 150 active members. ”To club members, a pipe is far more than a nicotine delivery device. It’s a way to calm down,” Argiris says.

“A pipe smoker differs from the typical cigarrete smoker. You’ll find that the pipe smoker is much more relaxed, more easy going and not as nervous,”  he adds.

Honor guest of the event was founder of the Amman Pipe Club, Bassem Dajani, who traveled all the way from Jordan to attend Wednesday’s event.

Established four months ago Bassem says the Amman Pipe Club is still in its infancy hoping that it will grow bigger.

“Prohibitionists who view all smokers as addicted people who want to be saved from their own nastiest impulses will never understand club members, who see smoking as a form of art.  An art for thinkers,” he says.

“Take a look through out history …Einstein, President Ford, Donald Rumsfled and King Hussein of Jordan were all avid pipe smokers.”

“Pipe smokers collect pipes the way other people collect coins or stamps. They compare shapes, sampling tobaccos of various blends and flavors. They know a pipe must be carefully packed and cleaned to be properly enjoyed,” he adds.

The event ended with the club donating three pipes to three different members.

International Pipe Smoking Day was celebrated for the first time in 2008.