Posted on: August 2nd, 2012 by Arif Mansour No Comments

As UN prepares food relief for Aleppo, renews call for restraint in fighting 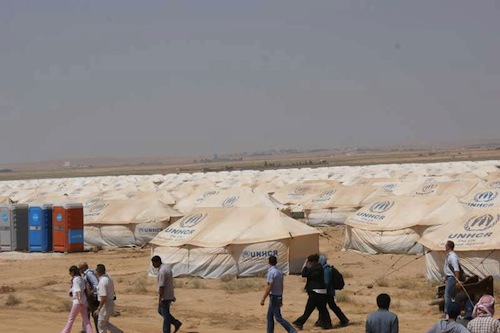 As the United Nations prepares to deliver food relief to people in Aleppo, the UN observer mission in the country renewed its call for the Government and the opposition to refrain from further violence after reports of an increase in fighting and the use of heavy weaponry in the city over the past 72 hours.

“Our observers are reporting exchange of fire, shelling and explosions in addition to use of helicopters, tanks, heavy machine guns and artillery shelling,” said the spokesperson for the UN Supervision Mission in Syria (UNSMIS), Sausan Ghosheh, adding that observers also saw firing from a fighter jet yesterday.

Ghosheh said the violence occurred in the southeastern neighbourhoods of Aleppo, around the Salah Eddin area, with the Mission’s observers confirming that opposition forces are also in possession of heavy weapons, including tanks.

“The UN has reminded both parties of their obligation under international humanitarian law, to protect civilians,” she said in the capital, Damascus. “We call on both sides to show utmost restraint and shift from this mind-set of confrontation to a mind-set of dialogue.”

Established in April, UNSMIS had suspended its regular patrols due to the escalating violence, in which over 10,000 people, mostly civilians, have been killed and tens of thousands displaced since the uprising against President Bashar al-Assad began some 17 months ago.

Aleppo has been the centre of intense combat between Government and opposition forces over recent days. In addition, there have been reports of an escalation in violence in many towns and villages, as well as Damascus.

Earlier this week, Secretary-General Ban Ki-moon voiced deep concern about the impact of shelling and use of other heavy weapons on civilians in various locations around the country, particularly in Aleppo, where violence over recent days has also already caused a large number of civilians to flee their homes.

Today, the World Food Programme (WFP) announced that some 28,000 people in Aleppo will receive food assistance following reports of shortages of food, gas and electricity after weeks of violence.

Since the beginning of the clashes in Aleppo, the country’s most populous city, WFP and its partner, the Syrian Arab Red Crescent (SARC), have distributed food rations to close to 40,000 people.

In July alone, WFP said it provided food assistance to 541, 575 people throughout the country. However, the agency said, it had aimed to reach 850,000 people, but was prevented from doing so by fighting in Homs, Hama, Deir Ezzor, as well as Damascus and Aleppo.

In addition to distributing food to people in the country, WFP has also launched a regional refugee emergency operation to provide food to those who have fled the violence.

The number of those who have fled has significantly increased since the start of the clashes in Aleppo – the International Committee of the Red Cross and the Syrian Arab Red Crescent estimate that some 200,000 people fled the city and the surrounding areas over the past weekend.

The six-month emergency operation, which started in July, will provide food to vulnerable Syrians in Jordan, Lebanon, Turkey and Iraq, through food vouchers. With the operation, WFP aims to assist 67,000 people this month and progressively reach 120,000 by December.

The agency also warned that the Syria operation is facing a critical funding shortfall of about $62 million.