Assad says not a puppet of the West; Vows to ‘live and die’ in Syria 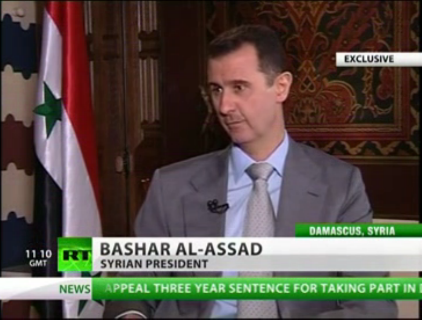 Syrian President Bashar al Assad vowed to “live and die in Syria” while warning that any Western military intervention to oust him would have unbearable consequences for the Middle East and beyond, in an interview on Russian TV.

“I think that the cost of a foreign invasion of Syria – if it happens – would be bigger than the entire world can bear … this will have a domino effect that will affect the world from the Atlantic to the Pacific,” he said.

Earlier this week, Britain’s Prime Minister David Cameron suggested that Mr Assad could be allowed safe passage out of the country in order to end the nation’s crisis.

But appearing on the Russian Arabic-language channel Russia Today, Mr Assad said “I am not a puppet. I was not made by the West to go to the West or to any other country,” he said. “I am Syrian, I was made in Syria, I have to live in Syria and die in Syria,”

It was not clear where the interview took place. The full interview will be broadcast on Friday, the TV station said.

Russia has remained one of Syria’s most loyal allies, protecting Damascus from international action at the United Nations Security Council.

Assad’s remarks coincided with a meeting in Qatar on Thursday of Syria’s fractious opposition to hammer out an agreement on a new umbrella body uniting rebel groups inside and outside Syria amid growing international pressure to form a more cohesive and representative opposition.

The Syrian National Council’s general assembly of some 420 members chose a 40-member leadership body after hours of voting at a conference held at a hotel in the Qatari capital of Doha, according to Reuters. The 40-member group is to choose an 11-member executive body and an SNC president later Thursday.

Meanwhile, two civilians, a woman and a young man, in Turkey’s Hatay border province were wounded by stray bullets fired from Syria, according to a Turkish official. According to the same source, Ankara has officially requested that NATO deploy Patriot missiles along the border with Syria, over fears that armed conflict could spill across the border.