Posted on: October 20th, 2015 by AlYunaniya Staff No Comments 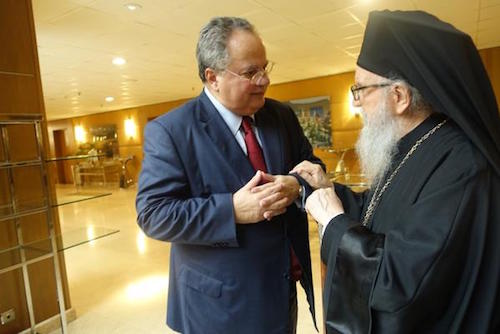 In a statement, the Presidium of the Athens International Conference on “Religious and Cultural Pluralism and Peaceful Coexistence in the Middle East”, held in Athens from 18 to 20 October 2015 said:

- The International Conference [...] dealt with the urgent humanitarian crisis which are currently facing religious communities and cultural entities in the Middle East region caused by ongoing conflicts, tensions and extremism.

- The participants in the Conference, Patriarchs and Primates of Christian Churches, religious leaders of the Muslim and Jewish world, as well as other prominent religious personalities, representatives of international politics, academic communities and civil society, expressed their concern about the unprecedented humanitarian situation and condemned human rights violations and acts of terrorism and violent extremism perpetrated against religious and cultural communities in the context of the protracted conflicts in the area, especially in Syria and Iraq.

- The Conference sought to contribute to raising awareness of these pressing issues and enhance international efforts for the immediate humanitarian relief of these communities, their protection from violence, persecution and discrimination, their safe voluntary return and resettlement in their ancient cradles.

- Participants stressed that every effort should be made to urgently stop the conflicts and to ensure respect of fundamental rights and religious freedom of these communities, as well as their right to remain to their ancestral land, where they have maintained a constant presence for thousand years, defending universal values such as tolerance, multiculturalism, pluralism and peaceful coexistence.

- The Conference provided an opportunity to discuss initiatives that contribute to enhance unity against violence in the name of religion or caused by intolerance to cultural pluralism, with the aim to support religious and cultural diversity in the region and establish a dialogue founded on the principles of mutual understanding and cooperation. The participants shared testimonies, interreligious experience and best practices.

- Plenary discussions also focused on ways to restore damaged infrastructure, improve health education and living conditions of these communities in terms of dignity, participation and mutual understanding, and promote development in the region after the end of crisis.

- Furthermore, the deliberate destruction and looting of religious and cultural heritage assets such as churches, mosques, religious shrines and sites, monuments and museums in the region was strongly condemned and support was provided to every effort ensuring the effective protection of these cultural treasures.

- The Conference was further enriched by the experience of already assumed international initiatives. Participants reflected on ways to further proceed, address the pressing humanitarian situation and defend the rights of these communities.

- Participants highlighted the need to remain vigilant and exchanged ideas on a Greek proposal for the establishment of a follow up mechanism in Athens, which will take the form of a Centre that would examine the situation, in terms of freedom of religion or belief and cultural pluralism, would codify the various problems and would elaborate concrete proposals and viable solutions. Participants to the International Conference will be invited to take part to the activities of this Centre.