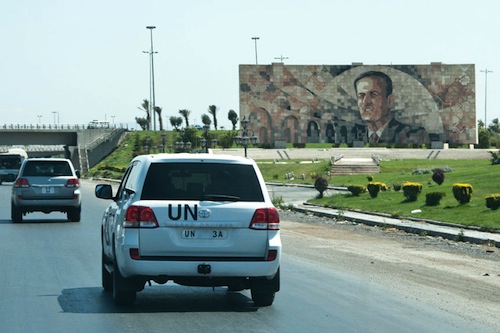 United Nations observers who returned to the Syrian village of Tremseh on Sunday said that, based on what they saw and on witness accounts, the attack there three days ago was targeted at army defectors and activists.

Staff from the UN Supervision Mission in Syria (UNSMIS) observed over 50 houses that were burned and/or destroyed, according to a statement issued today that also noted that “pools of blood and brain matter were observed in a number of homes.”

The “consistent account” relayed by 27 local villagers who were interviewed by the UN team indicated that the attack began in the early hours of 12 July with the shelling of the village followed by ground operations.

“According to those interviewed, the army was conducting house to house searches asking for men and their ID cards. They alleged that after checking their identification, numerous were killed. Other men were taken out of the village.

“On the basis of some of the destruction observed in the town and the witness accounts, the attack appears targeted at army defectors and activists,” said the statement. UN observers also confirmed the use of direct and indirect weapons, including artillery, mortars and small arms.

The Mission added that the number of casualties is still unclear and that it is trying to seek further verification.

Annan will visit Moscow on Monday for two days of talks with Russian President Vladimir Putin and Foreign Minister Sergey Lavrov on the crisis in Syria.

Meanwhile, Deputy Secretary-General Jan Eliasson met today with the Secretary-General of the League of Arab States, Nabil Elaraby, on the sidelines of the African Union summit in Addis Ababa. They shared their strong concerns about the situation in Syria and expressed support for the work of Mr. Annan and the six-point plan.