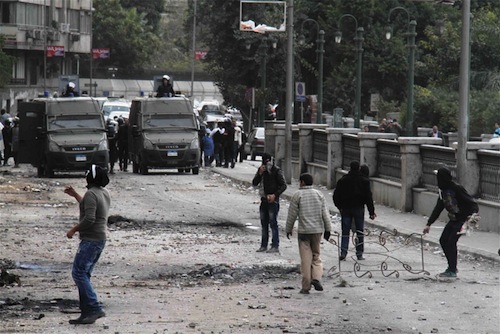 The Egyptian Organization for Human Rights (EOHR) is deeply concerned by the referral of a large number of Egyptian journalists and TV presenters to the prosecutor general’s office. Over the past few months a barrage of lawsuits have been filed against them by Egyptian lawyers in what constitutes a threat to freedom of expression in Egypt.

On 1 April 2013, the prosecutor general’s office passed on to national security prosecutors a claim filed against the popular presenter and satirist Bassem Youssef for certain content presented in his satirical program El Bernameg.

According to the report, Youssef spread lies about Egypt’s internal affairs in a recent episode, distorting the country’s image both locally and internationally.

Youssef’s case has had other repercussions. On 2 April, prominent TV host Gaber al-Qarmouty and journalist Shaimaa Abulkhair, the media consultant for the Committee to Protect Journalists, were also referred to national security prosecutors for discussing the Youssef probe. In a phone interview with Al-Qarmouty on his show, Abulkhair spoke critically about these types of investigations being conducted against journalists and media personnel.

Last week, the prosecutor general ordered that TV hosts Amr Adib, Lamis Al-Hadidi and Youssef Al-Husseini should also be investigated, accusing them of inciting public disorder and chaos, threatening peace and national security, and presenting the public with biased information.

EOHR has observed that these defamation lawsuits based on ‘Hisbah’ laws [an Islamic principle by which one Muslim can bring a case against another Muslim for perceived violations against Islam] have risen in number, reaching approximately 600 official complaints since President Mohammad Morsi took over.

EOHR condemns and denounces this fierce attack against free speech and calls for reforming legislation in order to halt the abuse of such laws in Egypt.

President of EOHR Hafez Abu Seada expressed shock at the case of Bassem Youssef and those who came to his defense, noting that the appearance of media personalities in courts so often threatens the future of freedom of expression in Egypt.