Posted on: October 1st, 2012 by AlYunaniya Staff No Comments 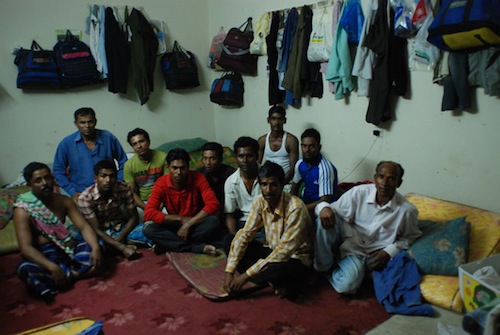 The 123-page report, “For A Better Life: Migrant Worker Abuse in Bahrain and the Government Reform Agenda,” documents the many forms of abuse and exploitation suffered by migrant workers in Bahrain and details the government’s efforts to provide redress and strengthen worker protections. Bahraini authorities need to implement labor safeguards and redress mechanisms already in place and prosecute abusive employers, Human Rights Watch said. The government should extend the 2012 private sector labor law to domestic workers, who are excluded from key protections.

“Bahraini authorities understand that migrant workers have helped build the country and have instituted some important reforms,” said Joe Stork, deputy Middle East and North Africa director at Human Rights Watch. “But without more vigorous enforcement, these reforms do little to address the most widespread rights violations such as failure to pay wages and withholding workers’ passports.”

Bahrain has just over 458,000 migrant workers, about 77 percent of the total work force, public and private. Most are employed in low-skill, low-wage jobs in construction, trade, manufacturing, and domestic work.

Recent government reforms include safety regulations, measures to combat human trafficking, workers’ rights education campaigns, and rules giving migrants greater ability to leave their employers. Human Rights Watch found that authorities enforce some safeguards, such as a ban on midday construction work during dangerously hot summer months. But authorities have not adequately carried out several other worker protections, such as those against withholding wages, charging recruitment fees, and confiscating passports. All of these practices make it harder for workers to leave abusive work situations.

Migrant workers in Bahrain also face discrimination and abuses from Bahraini society in general. Human Rights Watch documented several violent attacks against South Asian migrant workers in March 2011, during a period of heightened political unrest. Migrants in some cases said their attackers were anti-government protesters. Pakistani workers provided evidence to Human Rights Watch about attacks that led to the death of a fellow worker and seriously injured others.

Human Rights Watch found that employers who violate migrant worker rights typically do not face the penalties provided in Bahraini law and rarely, if ever, face criminal consequences outlined in the penal code and laws against human trafficking. Human Rights Watch found no evidence that Bahraini authorities have utilized anti-trafficking legislation, introduced in 2008, to prosecute labor related violations.

The plight of many migrant workers begins in their home countries, where many pay local recruitment agencies fees equivalent to 10 to 20 months of wages in Bahrain, incurring substantial debts, often using family home and valuables as collateral. This debt, sometimes exacerbated when employers withhold wages, effectively forces many migrants to accept abusive work conditions.Employers in Bahrain routinely confiscate workers’ passports. Coupled with the prevailing sponsorship system (kefala), these practices greatly limit the ability of workers to leave employers and freely return home.

Workers consistently told Human Rights Watch that unpaid wages topped their list of grievances. Half of the workers Human Rights Watch interviewed said that their employers withheld their wages for between three to ten months. One domestic worker did not receive wages from her employer for five years.

Raja H. worked in construction along with 19 other men who said they had not been paid for four months. “My father died, and I’m the oldest brother,” he said. “I have younger brothers and sisters and one brother who’s working as a laborer in Pakistan. I call my family and they tell me to send them money. If I don’t get money, what am I supposed to say? I’ve got a wife and my kids are at school and it’s a big problem.”

Domestic workers, almost all of them women, described working up to 19-hour days, with minimal breaks and no days off. Many said they are prevented from leaving their employer’s homes, and some said that they aren’t provided with adequate food.

“We worked from 5:30 a.m. to 11 p.m.,” said Ayesha K. “No break time. No rest. No time to eat even.” The Gulf Daily News reported on September 18, 2012, the case of 63-year-old Aakana Satyawati, whose employer allegedly had not paid her for the past two years and had refused to allow her to leave to visit her family in India for nearly 21 years, “Isolated in private homes, domestic workers are often victim to appalling work hours for little pay, and sometimes physical and sexual abuse,” Stork said. “These workers face the greatest risk of abuse yet have the fewest legal protections.”

A new labor law that went into effect in July expands a few protections to domestic workers, including annual vacations, and codifies others, including access to labor dispute mediations. The law fails, however, to mandate needed reforms such as establishing maximum daily and weekly work hours and weekly days off.

In some areas, Bahrain has made noteworthy improvements, Human Rights Watch found. The Labor Market Regulatory Authority, an agency created in 2006, streamlines work visa applications and administers worker education campaigns, some of which provide information on worker rights and redress. A law passed in 2009 sharply reduced the transport of workers in “open air” trucks, which had led to many injuries and deaths. A government-run shelter has taken in female migrant workers fleeing abusive employers since 2006.

In many critical areas, reforms have not gone far enough, nor has implementation been adequate, Human Rights Watch found. Workers in two labor camps that Human Rights Watch visited said that Labor Ministry inspectors had cited their employers years ago for serious and hazardous housing code violations but that the employers never took the required actions and the camps remained open.