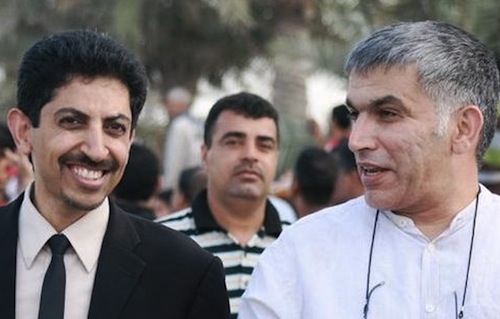 The Bahraini authorities must release 13 opposition activists and prisoners of conscience Amnesty International said yesterday, ahead of next week’s expected final verdict on their appeals.

The 13, who include prominent activist Abdulhadi Al-Khawaja, were originally sentenced by military court in June 2011 to between two years and life in prison on charges including “setting up terror groups to topple the royal regime and change the constitution”.

All of the men maintain their innocence.

Several of the defendants have spoken out in previous court hearings to describe their alleged torture and other ill-treatment in detention, including sexual assault, to coerce “confessions”.

“The Bahraini authorities must end this travesty of justice, quash all 13 opposition activists’ convictions and release them immediately and unconditionally. They are prisoners of conscience, held solely for peacefully exercising their rights to freedom of expression, association and assembly,” said Hassiba Hadj Sahraoui, Amnesty International’s Middle East and North Africa programme Deputy Director.

“This trial serves as a test for the Bahraini authorities’ to show commitment to reform, which they promised to much fanfare after the Bahrain Independent Commission of Inquiry report was launched.”

Amnesty International also calls on the authorities to order an immediate and independent investigation into some of the defendants’ allegations of torture, make public the findings of such investigations and bring anyone found responsible for abuses to justice.

Due on 14 August, the verdict relates to appeal hearings after the Court of Cassation decided in April 2012 to refer the case to a civilian court. The High Criminal Court of Appeal started hearing the case on 22 May 2012.

Fourteen opposition activists were arrested between 17 March and 9 April 2011 after taking part in pro-reform protests in Manama. One of the men has since been released.

On 22 June 2011, Bahrain’s National Safety Court, a military court, announced its verdict and sentenced them to between two years and life in prison on charges including “setting up terror groups to topple the royal regime and change the constitution”.

An Amnesty International observer present at one of the appeal sessions, on 6 September 2011 concluded that no evidence was presented in court proving that the 14 had committed a crime and used or advocated violence.

On 28 September 2011 in a session that lasted only a few minutes, a military appeal court upheld all the opposition activists’ convictions.

The men’s appeal before a civilian court began in May this year, a decision of the Court of Cassation.

Amnesty International continues to call for the immediate and unconditional release of all prisoners of conscience in Bahrain, and urges the Bahraini authorities to carry out an independent investigation into all allegations of torture in detention and to bring those responsible to justice in fair trials.

Al-Hur Yousef al-Somaikh has since been released as he had served his sentence after the Court of Cassation reduced it to six months in prison.

Other opposition activists currently held in Bahrain include:

Mahdi ‘Issa Mahdi Abu Dheeb, the former president of the Bahrain Teacher’s Association (BTA), is serving a ten-year prison term for using his position “to call for a strike by teachers, halting the educational process and inciting hatred of the regime”, among other charges. His appeal is ongoing.

Nine health professionals are awaiting their final appeal verdict which is set for 1 October. In June 2012, an appeal court had upheld the convictions against the nine for their role in demonstrations in February and March 2011, but reduced their sentences from between five and 15 years’ imprisonment to between one month and five years in prison.