Bahrain urged not to crackdown on anti-government protests- Amnesty 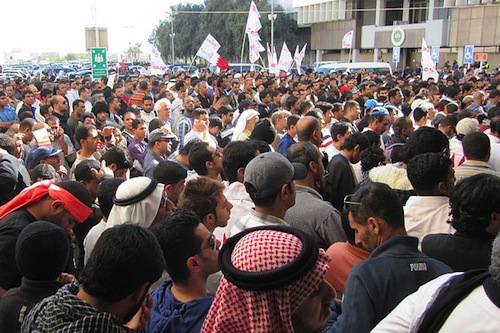 The Bahraini authorities must not crack down on mass anti-government protests scheduled for today said Amnesty International. The organization fears that new legislation introduced last week will be used to legitimize the use of force to quash peaceful protests.

“The people of Bahrain have the right to express their views freely and to protest peacefully without the threat of violence,” said Philip Luther, Middle East and North Africa Director at Amnesty International.

“For years the authorities in Bahrain have shamelessly sought to stifle freedom of expression, taking increasingly drastic steps to stamp out dissent with complete disregard for international law.”

Demonstrators plan to hold major rallies across Bahrain on Wednesday calling for an end to repression and for genuine political reforms.

On Monday, Bahrain’s Prime Minister, Shaikh Khalifa bin Salman Al Khalifa, warned that any attempts to destabilize the country will be dealt with harshly. He accused anti-government protesters of seeking to topple the government.

In the past two weeks a series of draconian decrees ordered by the King of Bahrain have been introduced, tightening the 2006 counter-terrorism law in a bid to suppress dissent.

These measures included a ban on all public gatherings and demonstrations in the capital city of Manama. Parents of anyone under 16 years of age who takes part in a demonstration will receive a written warning from the Ministry of Interior. They could face a prison term or be fined for a repeat offence.

“These draconian new measures are disgraceful. National security must not be used as an excuse to sanction the repression of peaceful protests,” said Philip Luther.

In a move to silence critics, Bahrain’s authorities have arrested journalists, photographers, bloggers and others active on social media networks in recent days.

Hussain Hubail, a 20-year-old cameraman, and Mohammad Hassan Sudayf, a 26-year-old blogger and translator, were arrested separately on 31 July. They were reportedly tortured when they were held incommunicado in the Criminal Investigation Directorate (CID). Mohammad Hassan Sudayf’s lawyer, ‘Abdul-‘Aziz Moussa, later tweeted that he had seen signs of torture on his client and revealed the charges against both detainees. Because of that, he too has been detained.

The organization also fears that international journalists could be barred from accessing the country to cover the demonstrations. A journalist working for Al-Jazeera was prevented from entering Bahrain from Qatar on 7 August. .

Since February 2011 when mass anti-government protests began in Bahrain the human rights situation in the country has deteriorated sharply. Security forces have repeatedly used excessive force against protesters. Scores of opposition activists have been arrested and tried before military courts. Many have been tortured in detention. Human rights activists have also been jailed for their work.