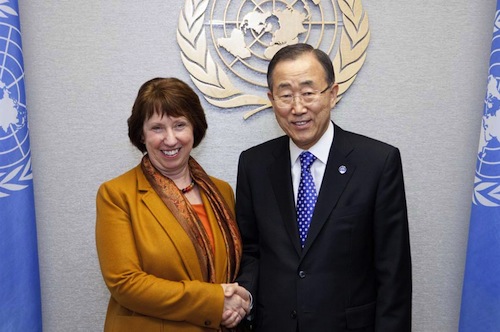 Secretary-General Ban Ki-moon voiced his deep concern about the direction of the transition in Egypt in a conversation with European Union High Representative Catherine Ashton, who visited the country this week and met with its deposed leader, Mohamed Morsy.

In particular, Ban shared with Ashton his concern about the continued detentions in the country, where the military earlier this month removed Morsy from the presidency amid widespread protests in which dozens of people were killed and wounded. The Constitution was then suspended and an interim Government set up.

Noting that it was welcome and important that Ashton had seen Morsy, the Secretary-Genera reiterated his call to release the former president and senior Muslim Brotherhood officials, according to a read-out of the conversation issued by Ban’s spokesperson.

They stressed the importance of an inclusive political process which would take into account views and aspirations of all parts of Egypt’s political spectrum, it added.

Egypt has been undergoing a democratic transition following the toppling of President Hosni Mubarak two years ago in the wake of mass protests similar to those seen in other parts of the Middle East and North Africa as part of the “Arab Spring.”

Ban and the High Representative also discussed the Middle East peace process, with the Secretary-General expressing his hope for the success of the current efforts to bring the Israelis and Palestinians together at the negotiating table, and the UN’s readiness to work with the EU and other partners in the diplomatic Quartet to support the process.