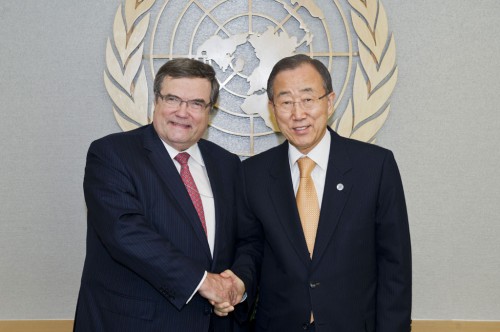 Secretary-General Ban Ki-moon yesterday reaffirmed his strong commitment to convene a United Nations-sponsored Conference on the establishment of a Middle East zone free of nuclear weapons and all other weapons of mass destruction in Helsinki, Finland, in mid-December.

Mr. Ban yesterday met with the Finnish Under-Secretary of State, Jaako Laajava, the Conference Facilitator, who briefed him on the preparations and prospects for convening the meeting after his talks this week in Cairo with senior representatives from the UN, Russia, the United Kingdom, the United States and the League of Arab States.

“The Secretary-General reaffirms his strong support for Mr. Laajava and welcomes his intensive efforts,” a statement issued by Mr. Ban’s spokesperson said. “He underlined the importance of the Conference, which is a unique opportunity for all States of the region to collectively enhance their security. He urges all States of the region to participate in and contribute to a successful Conference.”

The May 2010 review meeting of the Nuclear Non-Proliferation Treaty (NPT) – which takes place every five years – called for a UN-sponsored conference in 2012 to establish a nuclear-free Middle East to be attended by all States in the region.

Currently, there are five such zones: Latin America and the Caribbean; the South Pacific; South-East Asia; Central Asia; and Africa.