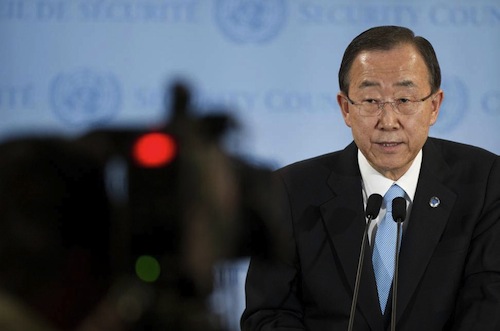 Secretary-General Ban Ki-moon called on the Syrian Government to take the initiative in declaring an immediate unilateral ceasefire, and on the opposition to then accede to it, in a renewed bid to end what he called a “regional catastrophe with global ramifications.”

“I have conveyed my strong message to the Syrian Government that they should immediately declare a unilateral ceasefire,” he told a news conference in Paris, after holding talks with French President François Hollande on the 19-month uprising against Syrian President Bashar al-Assad and his Government in which more than 31,000 people have already been killed according to activists and human rights groups.

“Of course their reaction was that, what would happen if they do it, because the opposition forces might continue. That is exactly what I have discussed, and I am in the process of discussing with the key Member States of the Security Council and the countries in the region,” he added, stressing that Joint UN-Arab League Special Representative Lakhdar Brahimi will continue to discuss this matter with regional leaders, including Mr. Assad.

Mr. Ban expressed concern over the “extremely dangerous” impact of the crisis, which has seen an escalation of the conflict on the Syrian-Turkish border and a flood of hundreds of thousands of refugees pouring into neighbouring countries.

In a related development, the UN Children’s Fund (UNICEF) announced today that it is expanding its operation within Syria and in countries affected by the crisis to cope with the growing needs of children and families as winter approaches, such as providing heating, children’s clothes and prefabricated classrooms. Next month it plans to support a vaccination campaign to protect up to 1 million children against measles and other diseases.

Around 1 million children are affected by the conflict inside Syria, and more than 100,000 Syrian children have been displaced to Lebanon, Jordan, Turkey and Iraq. UNICEF is urgently scaling up its emergency response to reach hundreds of thousands of children with child protection, water, sanitation and hygiene, health and nutrition, and education initiatives. But a lack of funds is inhibiting what can be achieved. UNICEF has appealed for $91 million for its operations.

Meanwhile, Syrian opposition fighters have taken control of Maarat al-Numan, a strategic town in Idlib province on the highway linking Damascus with the commercial hub of Aleppo, activists say.

“Regular forces pulled back from all of their checkpoints around Maarat al-Numan, except for one at the entrance of the town,” Rami Abdel Rahman, a UK-based activist who gets information from a network of sources on the ground in Syria, said on Tuesday, according to Al Jazeera.

“This is a strategic location on the route from Damascus to Aleppo. All the regime reinforcements headed to Aleppo must pass through Maarat al-Numan.”

Elsewhere in the country, soldiers moved into the central city of Homs and Reuters news agency reported that rebel suicide bombers struck at an Air Force Intelligence compound in Damascus used as an interrogation centre – the latest attack to bring the conflict close to Assad’s power base.