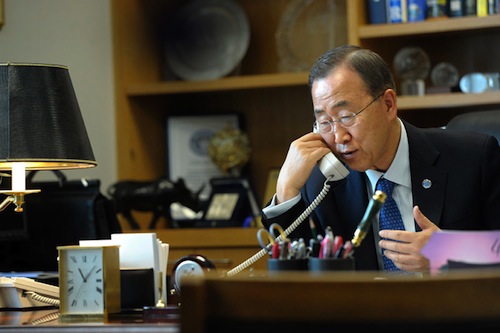 Secretary-General Ban Ki-moon expressed his profound concern about the direction in which the transition in Egypt is moving and reiterated his strong condemnation of the upsurge of violence that has led to scores of people killed and hundreds others injured.

In a telephone call with Egyptian Interim Vice President Mohamed ElBaradei, Ban called on the interim authorities to assume full responsibility for the peaceful management of the demonstrations and to ensure the protection of all Egyptians, regardless of party affiliation.

“The Secretary-General renewed his calls for the interim authorities to launch a genuinely inclusive, peaceful political process for going forward,” according to a readout of the conversation provided by a UN spokesperson in New York.

“He underlined that with every new death this long-term reconciliation becomes harder,” the readout continued.

During the phone conversation, Ban also appealed to all Egyptian leaders to urge their supporters to show restraint. He urged Egyptians to put the interest of their country above individual, group and political interests in order to start a meaningful reconciliation process.

The UN chief also reiterated his call that deposed president Mohammed Morsi and other Muslim Brotherhood leaders to be released by the interim authorities, or to have their cases reviewed in the fullest transparency.

Ban also discussed the situation in Egypt with the Foreign Ministers of Turkey and Qatar, and the Secretary-General of the League of Arab States. In these telephone discussions, Mr. Ban shared his deep alarm about the situation in Egypt, and the unacceptable loss of life over the past two days, according to his spokesperson.

UN High Commissioner for Human Rights Navi Pillay added her voice to the widespread condemnation of two days of violence and urged for a second time in a month that “credible, independent and prompt” investigation be launched into the large-scale killings in which the security forces appear to be heavily implicated and the responsible brought to justice.

Citing the latest “uncompromising announcement” from Ministry of Interior Mohammad Ibrahim – who vowed today that security forces would deal “firmly and strongly” with anyone who threatens national stability – Pillay warned that the confrontational approach by both sides “is leading to disaster.”

“Despite all the warnings, all the calls for restraint, more than 150 Egyptians have died during protests over the past month, not just in Cairo but in other cities as well,” she said in a statement issued by her office (OHCHR).

“I fear for the future of Egypt if the military and other security forces, as well as some demonstrators, continue to take such a confrontational and aggressive approach. Supporters of the Muslim Brotherhood have the right to protest peacefully like anyone else,” Pillay stressed.

The High Commissioner said she was extremely alarmed by “the increasingly dangerous polarization that is gripping the country.”

“Egypt stands at a crossroads. The future of this great country that gave so much to civilization, depends on how its citizens and authorities act over the following days and months,” she noted.

“I urge all parties to set aside their grievances and engage in urgent national dialogue with the aim of restoring constitutional order through free and democratic elections and to end the violence and all hate speech,” Pillay said.

“Given what has happened in recent days, further protests are inevitable, and the onus is clearly on both the security forces and the protestors to ensure there is no repetition of yesterday’s terrible and deeply tragic events,” she cautioned.