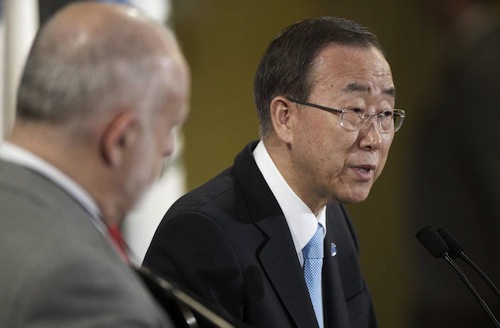 Secretary-General Ban Ki-moon yesterday hailed the dedication and courage of journalists, activists, policy-makers and civil society representatives who have worked to promote democracy across the Middle East and North Africa, and urged them to continue their efforts to advance peace, especially among Israelis and Palestinians.

“You gather at a pivotal time in the Middle East and North Africa,” Mr. Ban said in a message to the two-day, UN-backed International Media Seminar on Peace in the Middle East Peace that began in Geneva today. “The world has witnessed profound changes across the region in the past 18 months, driven by brave and committed citizens, with women and youth in the vanguard.”

The UN chief noted in the message – which was delivered by Maher Nasser, Acting Head of the Department of Public Information (DPI) – that journalists, activists, policy-makers and representatives of civil society have played important roles in these historic movements for change.

“I salute your dedication and courage in promoting transparency, accountability and democracy. I urge you to continue to promote peace and increase mutual understanding between communities, especially Palestinians and Israelis,” he said.

The annual seminar, established by the General Assembly in 1991, is designed to look at the role of the media in advancing the peace process – one which is currently at a standstill. Israeli-Palestinian talks have been stalled since late September, following Israel’s refusal to extend a 10-month freeze on settlement activity in the occupied Palestinian territory. Ban said the regional awakening based on the ideals of freedom, dignity and non-violence cannot be complete without a resolution of the Israeli-Palestinian conflict.

“Too many Palestinians and Israelis have suffered for too many years,” he stated. “I am concerned at the fragility of the situation on the ground, and I urge the parties to overcome the current obstacles and resume direct, bilateral negotiations without delay or preconditions.” He pledged that the UN will remain engaged in helping the parties to forge a way forward, with the aim of establishing a sovereign, independent, contiguous and viable State of Palestine living side-by-side in peace and security with Israel. “Only then will we be able to move towards the broader goal of comprehensive regional peace in the Middle East,” said the Secretary-General.

This year’s seminar, organized by DPI in cooperation with the Government of Switzerland, will examine issues such as the impact of the Arab Spring on media coverage of the question of Palestine and the role of women’s activism and the media in the Israeli-Palestinian peace and the wider region.

In his remarks to the gathering, Mr. Nasser stated that the objective of the seminar, which is taking place during a period of “profound and tumultuous change,” is two-fold.

It seeks to sensitize public opinion on the question of Palestine, he said, and to examine some of the evolving media-related dynamics shaping events in the region, while exploring how they relate to the situation between Israelis and Palestinians.

“Our discussions will focus on the role of the media in covering different aspects of recent events in the Middle East, and how they relate to the situation in Israel and Palestine,” he said. “This is an opportunity for representatives of the media and civil society from the region and beyond to come together to share their experiences and exchange views.”

The past 16 months have witnessed historic changes as a wave of popular uprisings across North Africa and the Middle East, which became known collectively as the Arab Spring, led to changes in government in Tunisia, Egypt, Libya and Yemen, and to uprisings in Bahrain and Syria, among other countries.