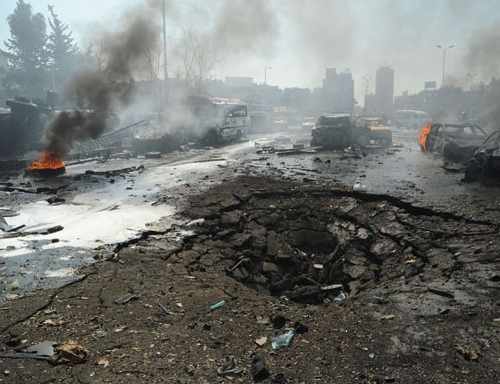 At least 40 people, most of them civilians, have been killed in a powerful car bomb targeting the ruling Baath Party headquarters in central Damascus on Thursday, The Syrian Observatory for Human Rights reported.

“The number of deaths has risen to 42 Syrians, who were killed by the bombed car explosion near the regime forces’ checkpoint in the Mazraa district, near the ruling Baath party headquarters,” Syrian Observatory of Human Rights reported.

Most of casualties were civilians from the area and drivers of cars passing by.

The number of deaths is likely to rise because of the tens of injured civilians, some of which are in critical states, SOHR added.

Television footage showed at least four bodies scattered across the street after the blast, which official state media SANA described as a terrorist attack.

The windows of Russia’s embassy in Damascus were blown out by the deadly blast but none of its staff were hurt, Russian news agencies reported.

Russia is one of the few big powers to keep ties with the regime of Syrian President Bashar al-Assad amid the conflict with rebels.

The explosion comes amid reports of fierce clashes over the past few days between the opposition and regime forces around Damascus, with rebels trying to make advances in the city.

Also, the head of the Democratic Front for the Liberation of Palestine, Nayef Hawatmeh, was lightly injured in Thursday’s explosion, a DFLP official Khalid Atta told Maan news agency.

Atta said the bomb had not targeted the DFLP office, which was damaged in the attack.

More than 70,000 people across the country have died, according to the United Nations since the beginning of the two-year conflict in Syria.

Thursday’s blast, was followed by at least three other explosions elsewhere in Damascus, according to activists.