Posted on: April 6th, 2012 by AlYunaniya Staff No Comments 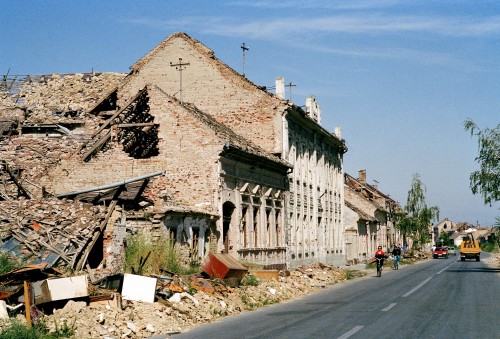 Sarajevo on Friday commemorates the 20th anniversary of the start of the Bosnian war which left the country’s Muslims, Serbs and Croats deeply divided until today.

Bosnians walked with tears on Sarajevo’s main street, leaving flowers on 11,541 red chairs arranged in seemingly endless rows representing  the men, women and children killed in a siege that ended up being the longest of a city in modern history.

Bosnia’s Muslims and Croats voted to break up from the former federation in a referendum. Milosevic responded to Bosnia’s declaration of independence by attacking Sarajevo, which soon became known as the city where Serb snipers continuously shot down helpless civilians in the streets, including eventually over 3,500 children according to the UN.

The  Bosnian Serbs embarked on a campaign of ethnic cleansing driving out Muslims and Croats from what they tohught to be  Serb territory leaving behind thousands of dead poeple and rapes.

According to the Bosnian Institute, 83.33% of civilian deaths in the Bosnian war were Muslims. It was the 1995 massacre of 8,000 Muslims that finally led to NATO intervention which forced Bosnian Serbs to pull back.

The massacre is the only episode of the Bosnian war to have been ruled a genocide by two international courts: UN war crimes tribunal and the the International Court of Justice.

Modern Bosnia is still divided along ethnic lines among a Muslim-Croat Federation and the Bosnian Serbs’ Republika Srpska.

According to U.S. Assistant Secretary of State Richard Holbrooke, the Bosnian war was “the greatest failure of the West since the 1930s.”