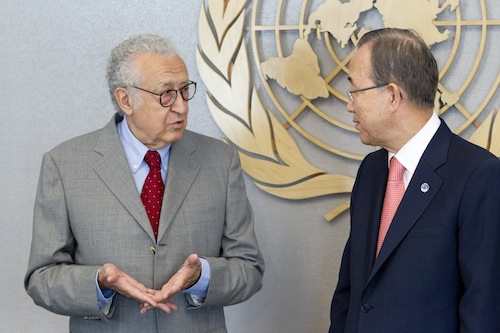 Some of the warring parties in the conflict in Syria are expected to observe a ceasefire later this week, as called for recently by the United Nations and League of Arab States’ Joint Special Representative on the crisis there, Lakhdar Brahimi, a UN spokesperson indicated today.

“You will have seen his [Mr. Brahimi’s] comments in Cairo today earlier today, in which he said he expected an announcement by the Syrian Government regarding his proposed pause in fighting,” Martin Nesirky, the spokesperson for Secretary-General Ban Ki-moon, told a news briefing at UN Headquarters in New York.

“He said that many in the opposition have also responded positively,” Mr. Nesirky added.

According to media reports, the Joint Special Representative made the comments while addressing journalists in the Egyptian capital of Cairo; earlier in the week, Mr. Brahimi had been in the Syrian capital, Damascus.

The Government of Syria will reportedly make an announcement on the ceasefire on Thursday – and was encouraged to do so positively by the Security Council which today received a briefing from Mr. Brahimi on his latest efforts.

Last week, while in Tehran, Joint Special Representative Brahimi had appealed to Iranian authorities to assist in achieving a ceasefire in Syria during the upcoming Muslim holiday of Eid al-Adha, underscoring that such a move, during one of the holiest holidays celebrated by Muslims around the world, would help create an environment that would allow a political process to develop.

Taking place on Friday, the religious observance of Eid al-Adha – or the Feast of the Sacrifice – commemorates the willingness of Abraham to sacrifice his son Ishmael as an act of obedience to God.

Along with his counterpart at the League of Arab States, Nabil El Araby, the UN chief has called on all the parties in Syria to heed the call of Mr. Brahimi, in addition to calling on the international community to support the ceasefire appeal.

Today, following Mr. Brahimi’s video-conference briefing to the Security Council via video-conference, in a press statement read out by Ambassador Gert Rosenthal of Guatemala – which holds the Council’s Presidency for the month of October – the 15-member body welcomed the ceasefire initiative and joined its voice to that of the UN and Arab League Secretaries-General.

“The members of the Security Council called upon all parties, in particular on the Government of the Syrian Arab Republic as the stronger party, to respond positively to the initiative of the Joint Special Representative, and reiterated their call of the Syrian authorities to allow immediate, full and unimpeded access of humanitarian personnel to all populations in need of assistance, in accordance to international law and guiding principles of humanitarian assistance,” Ambassador Rosenthal said.

The Council members also echoed Mr. Ban’s and Mr. El Araby’s calls for all regional and international actors to support the ceasefire proposal and to use their influence to facilitate its implementation.

“The members of the Council agreed that an Eid Al Adha cease-fire could be a first step towards a sustainable cessation of all violence,” Ambassador Rosenthal added, noting that such a halt would be in conformity with the Council’s resolutions 2042 and 2043, adopted earlier this year and which dealt with the Syrian conflict.

In the press statement, the Council members also called on the parties in Syria to cooperate with the UN and relevant humanitarian bodies to facilitate relief supplies, and in this context, called upon UN Member States to contribute urgently to the UN Syrian Humanitarian Assistance Response Plan, which seeks $348 million but has so far received $157 million.

In addition, the Council members underscored the need to launch an inclusive Syrian-led political transition “leading to a democratic, plural, political system that realizes the legitimate aspirations of the Syrian people for democracy, equality and justice, regardless of their affiliation, ethnicities or beliefs.”