Brahimi: Syrian crisis will be resolved or spread beyond borders 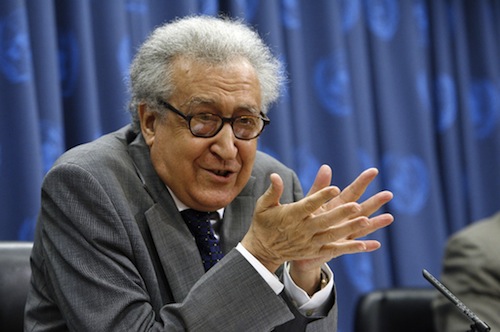 The crisis in Syria either will be resolved or will spread beyond the country’s borders and consume everyone, UN-Arab League Joint Special Representative Lakhdar Brahimi told journalists in Lebanon on Wednesday.

“Either it is resolved, he said, or it will spill over and consume everyone.”

Mr. Brahimi was speaking in the capital, Beirut, following a meeting with the country’s President and other senior leaders.

UN spokesperson Martin Nesirky said they discussed the UN Secretary-General’s appeal for a ceasefire in Syria to be initiated by the government and to which the opposition would respond positively.

He added that Mr. Brahimi also reiterated the Secretary-General’s call for all countries that provide arms to the various parties in Syria to stop doing so.

Brahimi said he was visiting Syria’s neighbours to listen to their views on the crisis, adding he would also visit Damascus, but not specifying a date.

Meanwhile, Syria has said it is prepared to explore a truce proposal by international peace envoy Lakhdar Brahimi.

But spokesman Jihad Makdissi stressed that the rebels and their backers would also need to be involved.

Fighting continued on Wednesday, with activists reporting clashes in the northern provinces of Idlib and Aleppo as well as outside Damascus, according to Al Jazeera.

Amateur videos posted online showed what activists said was a helicopter shot down by rebel fire near the northern town of Maaret al-Numan.

All international efforts to end Syria’s cconflict to date have failed. Both rebels and government forces have disregarded previous ceasefires.

The Syrian uprising has claimed about 31,000 lives since March last year, according to activists.