Breaking down barriers for girls in tech-related jobs 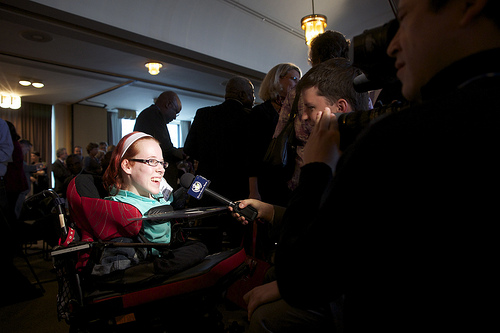 Education and technology experts from around the world gathered at New York’s Institute of International Education on Friday at an International Telecommunication Union (ITU) event to discuss the need to break down barriers and shift attitudes to encourage girls to go into technology-related fields.

During a high-level dialogue, leading figures in gender empowerment and technology debated and defined a roadmap for more successful approaches to attract school-age girls to the technology field, and agreed to work together to change attitudes that make this area of study unpopular among young women.

“Over the coming decade, there are expected to be two million more information and communications technology (ICT) jobs than there are professionals to fill them. This is an extraordinary opportunity for girls and young women – in a world where there are over 70 million unemployed young people,” said the ITU Secretary-General, Hamadoun Touré. He emphasized the need to cast aside outdated attitudes that are keeping young girls from considering technology as a career option. “ICT careers are not ‘too hard’ for girls. ICT careers are not unfeminine. And ICT careers are certainly not boring,” he added. “Encouraging girls into the technology industry will create a positive feedback look – in turn creating inspiring new role models for the next generation.”

The debate was one of many events organized in more than 70 countries around the world to mark Girls in ICT Day, which is celebrated every year on the fourth Thursday in April. Many events extended invitations to teenage girls and university students to spend the day at the offices of ICT companies, government agencies or academic institutions and to meet with female role models working in the technology field, so they could obtain a better appreciation of what it is like to work in the ICT sector.

The event also featured very special guest Joanne O’ Riordan, one of only seven people in the world with Total Amelia, a congenital birth condition causing the absence of all four limbs. ITU flew Joanne to New York from her native Cork in Ireland to take part in the event, so that she could give her perspective on the vital role of accessible technology in personal empowerment. In an inspirational speech, the 16-year-old, who celebrated her birthday in NY just prior to the event, told the audience her motto in life had always been ‘no limbs, no limits’.

“I use technology in all aspects of my life . . .  I was just one year old when I first began to explore the use of technology with our old computer. I figured out how to use it by simply moving my ‘hand’ and chin at a faster speed. Today I can type 36 words a minute and for someone with no limbs, I think that’s an incredible achievement,” she said.