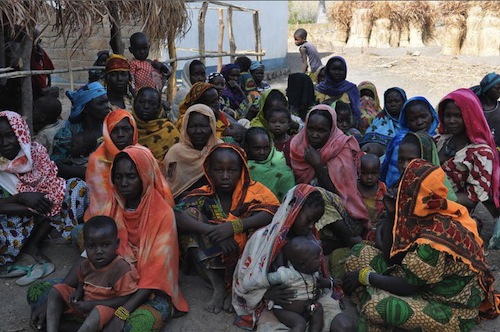 The crisis in the Central African Republic (CAR), including the seizure of power by the Séléka rebel coalition, has exacerbated an already difficult humanitarian situation, the United Nations relief wing said today, warning that tens of thousands of people could go hungry if safety and security throughout the country is not restored quickly.

“The protection of civilians is of the utmost importance,” said the acting UN Humanitarian Coordinator, Zakaria Maiga.

“I call on all parties to provide security for the people of Bangui and everywhere in the country, to refrain from further escalation of violence, and to respect international humanitarian and human rights law.”

Since then, an estimated 173,000 people have been displaced within the country, while more than 32,000 have fled to Cameroon, Chad and the Democratic Republic of the Congo, according to the UN Office for the Coordination of Humanitarian Affairs (OCHA).

“We are doing everything possible to step up humanitarian operations throughout the country and need safe access to people in need,” added Dr. Maiga.

Speaking from Bangui, Amy Martin, who heads the OCHA office there, said the security situation appears much calmer with less sporadic gunfire and more people out on the streets.

“Our main concern is getting the water supply back up and running. Getting the electric supply up and running is also critical to help keep the basic services and hospitals functioning,” Ms. Martin said.

The UN and partners are providing fuel to the hospitals, as well as medical supplies and emergency kits to support medical needs.

While some shops are open, Ms. Martin noted that banks, schools and government offices are still closed.

“People need to buy food. They need to access their money. They need to go back to work so they can get money to buy their food, so it is a huge chain event,” she said.

In the north of the country, Ms. Martin said the UN has “patchwork information” based on the presence of non-governmental organizations (NGOs), and urged greater safety and security for civilians and for aid workers.

The UN has relocated 311 staff belonging to the world body and some NGOs, but is keeping international and national staff in Bangui to “deliver what we can with what we have available and to where we can get to.”

“Until we have security on the roads that permit us to get from Bangui to the interior of the country it is going to be difficult to say we are fully functional again and fully operational,” she added.

The fighting with Séléka is the latest crisis in CAR, which has a history of political instability and recurring armed conflict.

There are currently 1.5 million people in the country who need assistance, and the latest fighting will likely increase that number. According to OCHA, more than 80,000 people are estimated to be at risk of severe food shortages during the upcoming lean season, while 13,500 children under the age of 5 are at risk of severe acute malnutrition.

Ms. Martin said the situation is especially concerning with the agricultural season coming up, and aid workers cannot get seeds and agricultural inputs out to farming communities.

“We already had a fragile situation prior to the crisis so food security support was being planned for many in the north and the north-east,” Ms. Martin noted.

The insecurity makes it “very difficult to ensure that the harvest season will happen and that is critical for the nutritional status of children.”

The UN and the authorities in Bangui have asked donors for $129 million to fund the 2013 CAR humanitarian appeal. OCHA said the humanitarian response plan is now being revised to take into account the additional needs generated by the latest crisis.