Change and the media in the Arab world 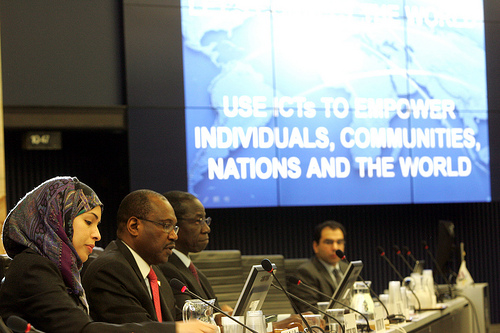 “Change in the Arab world has shown the power of aspirations for rights when combined with new and old media. Newfound media freedom is promising to transform societies through greater transparency and accountability”, UN Secretary General Ban Ki-moon said in a joint statement with UNESCO chief Irina Bokova a few days ago. “It is opening new ways to communicate and to share information and knowledge. Powerful new voices are rising – especially from young people – where they were silent before.”

The President of the General Assembly, Abdulaziz Al-Nasser, underlined the importance of new technologies in empowering young people to express themselves, and added that governments should support, not censor these mediums.   “Governments that try to suppress or shut-down new media platforms should rather embrace new media for the beneficial transformation of their societies. They need to create and promote a thriving environment for free media and free expression,” Al-Nasser said.

Free media transform societies by enlightening the decision making process with information, and thus empowering individuals to take control of their destinies. In this context, media freedom plays a crucial role in the transformation of society by reshaping its political, economic and social aspects, according to an UNESCO policy document.

This wave of revolution was triggered by the self-immolation of a vegetable peddler in Tunisia who set himself on fire after having his vegetable cart confiscated and being publicly humiliated by the authorities. This singular image of a desperate act by an ordinary person, which went viral through mobile  technology and social media, heralded an extraordinary beginning for this new decade. Years of censorship, suppression, and restriction came crumbling down with the fall of the former Tunisian authorities. Tunisia demonstrated the transformative power that can be brought forth by the convergence of social media, mobile connections, satellite TV and an earnest desire to fundamentally change socio- economic-political situation. It started a domino effect that went on to reach Tahrir Square in Egypt, the city of Benghazi in Libya, and other parts of the region. The actions of young people have been crucial during the movement, and amongst their tools has been social media.

Similarly, in Egypt, the use of social media, ICTs and satellite TV, has also played a revolutionary role in the democratic and political processes. Indeed, the protest movement against the Egyptian authorities was accelerated through the use of social networking sites and specifically through mobile phones. A case in point was the effort of a young Egyptian, Wael Ghonim, who created the Facebook campaign, “We are all Khaled Said”, referring to a 28-year-old Egyptian arrested six months earlier and beaten to death while he was held in detention. This Facebook campaign soon snowballed from thousands to more than a million supporters online. It has been one of the rallying points to denounce the regime’s violence and abuse.

While new voices have come forward seeking transformational change, media freedom is facing severe pressures across the world. According to official figures, 62 journalists were killed last year and many more were injured.

As of December 2011, 179 journalists were detained, indicating a 20 per cent increase from the previous year, and the highest level since the 1990s.

As media moves online, more online journalists, including bloggers, are being harassed, attacked, and killed for their work. UNESCO paper argued they must receive the same protection as traditional media workers.