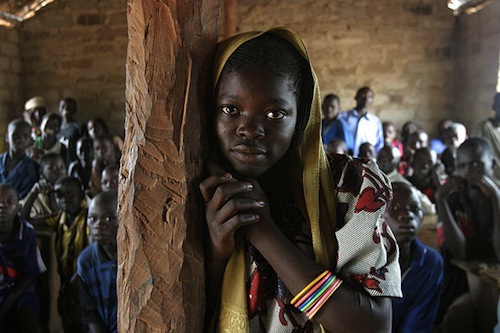 Calling for quick action by authorities in the Central African Republic (CAR), the United Nations Children’s Fund (UNICEF) warned that education was becoming another casualty of the months-long conflict, with half the country’s schools shuttered and hundreds of thousands of students at risk of missing out the entire year.

“The new Government must prioritise protection of and investment in the country’s education system, in order to respect and fulfil children’s basic right to education and to provide this generation of children with hope for a healthy future” says Souleymane Diabaté, UNICEF’s representative in the country, where there are over one million children out of school in total.

At least 250,000 children who started the 2012-2013 primary school year, and 30,000 who were in secondary school at the start of the crisis, could lose the entire school year if schools do not re-open in the coming weeks, the agency said in a news release.

Since the Séléka rebel coalition launched an offensive in December, 1.2 million people have been cut off from essential services and human rights violations have been widespread as the rebels, despite a peace accord, gained more territory and overran the CAR capital, Bangui, in late March.

According to UNICEF, the education system in the CAR was “very weak” even before the crisis. The literacy rate for young women is 27.4 per cent and for young men 51.1 per cent. Some 65 per cent of teachers are unqualified parents who have volunteered as teachers.

A major obstacle to school reopening is that teachers who have fled conflict affected areas have yet to return to their communities. In addition, the security situation prevents emergency distributions to schools for fear of pillaging.

UNICEF meanwhile is exploring options to provide safe spaces for children to learn and play in areas as they become accessible and is identifying areas that can be prioritized for resumption of educative activities.

The agency is calling on CAR authorities and all parties to the conflict to ensure safe access of children, parents and teachers to schools in order to enable their immediate re-opening.