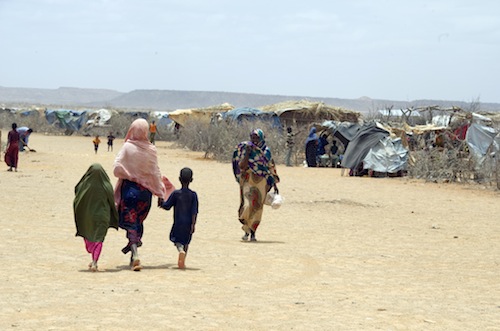 Climate change can play a role in driving people from their homes into areas of conflict and potentially across borders, according to a new United Nations report released yesterday.

“Climate Change, Vulnerability and Human Mobility,” based on discussions with around 150 refugees and internally displaced people in Ethiopia and Uganda in 2011, is published by the Office of the UN High Commissioner for Refugees (UNHCR) and the UN University (UNU).

“This report confirms what we have been hearing for years from refugees,” said the High Commissioner for Refugees, António Guterres, who introduced the report while attending the UN Conference on Sustainable Development (Rio+20) in Rio de Janeiro, Brazil.

“They did everything they could to stay at home, but when their last crops failed, their livestock died, they had no option but to move; movement which often led them into greater harm’s way,” he stated.

Most of those interviewed for the report, which was produced with the support of the London School of Economics and Bonn University, were farmers and pastoralists from Eritrea, Somalia and eastern Sudan. They were asked questions about the extent to which climate change contributed to their decision to leave their homes, and, eventually, their countries.

Most refugees reported that leaving their homes was a last resort and their first displacement was temporary and to an area close to home, according to a news release on the report.

The majority fled their countries after the areas they moved to were affected by insecurity or a lethal combination of violence and drought. “Cross-border movement, as a direct response to climate change, was exceptional,” the news release noted.

While many refugees described disrupted rainfall patterns in the past decade, with longer and more severe droughts than in previous years, none cited these negative shifts in weather as a direct catalyst for violent conflict, according to the report.

Some did, however, speak about the scarcity of food and crops after severe drought as exacerbating pre-existing conflicts, persecution and repression.

While most people displaced solely as a result of extreme weather conditions stay within their national borders, those that cross international borders are not necessarily covered by the 1951 UN Refugee Convention – the treaty that forms the legal foundation on which UNHCR’s work is based.

The Convention, adopted to resolve the refugee problem in Europe after the Second World War, provides a definition of who qualifies as a refugee – a person with a well-founded fear of being persecuted for reasons of race, religion, nationality, membership of a particular social group or political opinion – and spells out the rights and obligations between host countries and refugees.

The Nansen Initiative, due to be formally launched in October 2012 by Norway and Switzerland, with the support of UNHCR and the Norwegian Refugee Council, aims to address this legal and protection gap for people displaced across borders owing to environmental change and extreme weather events.

“I am convinced that climate change will increasingly be a driver in worsening displacement crises in the world,” said Mr. Guterres. “It is very important for the world to come together to respond to this challenge.”