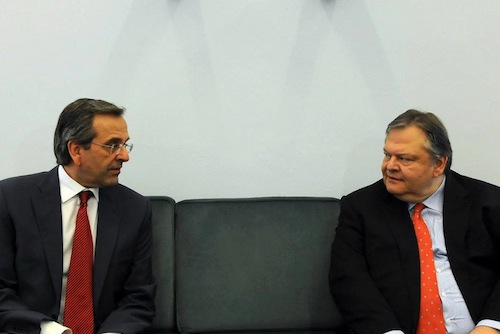 Prime Minister Antonis Samaras, PASOK leader Evangelos Venizelos and Democratic Left Fotis Kouvelis agreed yesterday to speed up the process by which Athens will ask its lenders for changes to the bailout agreement.

Sources told Kathimerini that the leaders, rather than leave the issue of renegotiating the MoU, until September, they agreed that Greece should adopt a more proactive stance. As a result, it is likely that Finance Minister Yannis Stournaras will be asked to bring up the issue at a Eurogroup meeting, which is due to take place towards the end of July

However, the task of renegotiating the terms will not be left up just to Stournaras. Samaras, Venizelos and Kouvelis are likely to form the key negotiating team but officials at other levels will also be involved.

Government officials said to protothema.gr that in the Eurogroup, Finance Minister Yannis Stournaras moved along the lines he had agreed with the Prime Minister and that the issue of extending the fiscal adjustment will come at the appropriate time in order to bring the most positive results for Greece.

ND says, the paper writes, that since the transfer of the renegotiation has a political cost, Venizelos wants to record a different attitude in order to avoid his share of the blame, and use it to his advantage later on. Venizelos who sees politics in connection with the ongoing weakening of his party insists on creating a national negotiating committee so that he could involve SYRIZA as well or charge it for avoiding to contribute to the national effort.

By searching for alternative measures, the coalition government is tryin to avoid implementing once again horizontal measures that could affect as many as 200,000 employees in the public sector.

Depending on the results and the government’s ability to renegotiate with Greece’s lenders, the measure of wage reduction by 12% on average, which was abandoned before the elections, should come back in the form of a bill that would provide for a scale-based cut in order to protext lower wages; high wages could end up suffering reduction that will probably exceed 20%.

Measures affect judiciaries, NHS doctors, academics, diplomats, high priests and uniformed army and police personnel, although a special formula is sought for the latter. The measure aims to save EUR 200 million euros this year and EUR 400 million in 2013.

According to media reports, these cuts will result in the elimination of dozens of benefits received by that portion of employees, as was the case with the single payroll in the public sector. The benefits that will be retained are expected to be integrated in the basic salary, while there might also be some minor increases (about 5%) in the final salary on the lower levels of the payroll.