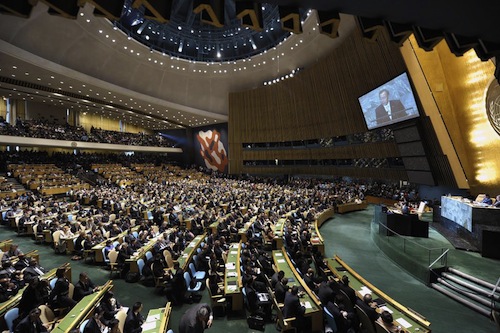 The General Assembly yesterday wrapped up its third review of the United Nations Global Counter-Terrorism Strategy by renewing its unwavering commitment to boost cooperation to combat the scourge and emphasizing the need to support its victims.

Adopted by the Assembly in September 2006, the Strategy is based on four pillars: tackling the conditions conducive to the spread of terrorism; preventing and combating terrorism; building States’ capacity to prevent and combat terrorism and to strengthen the role of the UN system in that regard; ensuring respect for human rights for all and the rule of law as the fundamental basis for the fight against terrorism.

In a resolution adopted at the end of the two-day review of the Strategy, the Assembly called on Member States, the UN and other appropriate international, regional and subregional organizations to step up their efforts to implement the framework in an integrated and balanced manner.

It also recognized the need to continue measures aimed at preventing and suppressing the financing of terrorism, and encouraged UN entities to cooperate with Member States on providing assistance, in particular to implement respective obligations to prevent such financing.

Recognizing the role that victims of terrorism could play, including in countering the appeal of terrorism, the Assembly emphasized the need to promote international solidarity in support of such victims and to ensure that they were treated with dignity and respect.

It also recognized the work of UN bodies and other organizations aimed at the support, recognition and protection of the rights of victims and urged them to step up their efforts to provide technical assistance for building the capacity of Member States to develop and implement programmes of assistance and support for victims of terrorism.

Opening the meeting yesterday, Assembly President Nassir Abdulaziz Al-Nasser had noted that the Strategy is “a watershed document in the international community’s fight against terrorism in all its forms and manifestations.” He also voiced the hope that the review would provide the necessary momentum towards the full implementation of the Strategy on the ground.