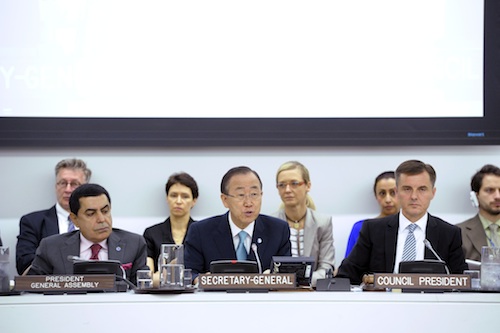 At a high-level panel discussion on accountability and transparency, United Nations officials yesterday highlighted the costs that corruption has on societies, and called on countries to forge partnerships to combat this issue.

“Corruption hampers the ability of nations to prosper and grow,” Secretary-General Ban Ki-moon said at the closing of the panel discussion, at UN Headquarters in New York. “Neither peace, development nor human rights can flourish in an atmosphere of corruption.”

Organized by the Economic and Social Council (ECOSOC), the ECOSOC 2012 High Level Panel on ‘Accountability, Transparency and Sustainable Development: Turning Challenges into Opportunities’ sought to spotlight the negative consequences that corruption and lack of transparency can have on sustainable development, while giving participants the opportunity to exchange views on innovative approaches and partnerships in combating the issue.

“Last year, corruption prevented 30 per cent of all development assistance from reaching its final destination. This translates into bridges, hospitals and schools that were never built, and people living without the benefit of these services,” Ban said. “This is a failure of accountability and transparency. We cannot let it persist.”

Addressing the opening of the discussion earlier Monday, the Deputy Secretary-General, Jan Eliasson, had described corruption as a threat to sustainable development and the “moral fibre of societies.”

“The work against corruption is even more important in weak and fragile countries – some just emerging from conflict – where the rule of law and institutions are still vulnerable,” he added, stressing that it is vital that governments include anti-corruption measures in all national development programmes.

The High Level Panel also promoted a renewed commitment for the ratification or accession to the UN Convention against Corruption by countries that have not yet done so. The Convention is the first legally binding global anti-corruption instrument – it obliges States to prevent and criminalize corruption, promote international cooperation, recover stolen assets and improve technical assistance and information exchange.

He added, “I once again urge every State to join the Convention and to add their own voices to the groundswell of countries seeking to promote accountability and transparency.”

The Panel discussion was part of ECOSOC’s high-level segment, which began last Monday and concludes today. A founding UN Charter body, ECOSOC is the venue where issues concerning the world’s economic, social and environmental challenges are discussed and debated, and policy recommendations made.

ECOSOC will now hold its operational activities segment and humanitarian affairs segment, before concluding on 27 July.

The 54-member Council coordinates the work of the 14 UN specialized agencies, ten functional commissions and five regional commissions, receives reports from ten UN funds and programmes and issues policy recommendations to the UN system, as well as to Member States. It meets every year, alternating between New York and Geneva.