Countries urged to empower women to tackle hunger and malnutrition 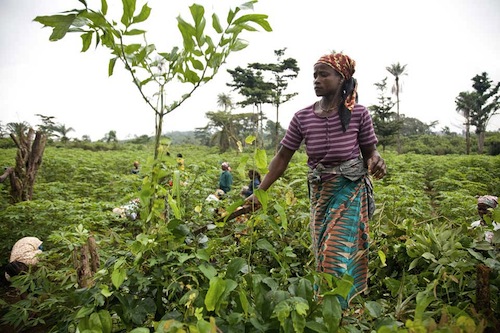 Governments must adopt food security strategies that empower women as this is an effective way to reduce hunger and malnutrition, a United Nations expert said.

“Sharing power with women is a shortcut to reducing hunger and malnutrition, and is the single most effective step to realizing the right to food,” the Special Rapporteur on the right to food, Olivier De Schutter, told the UN Human Rights Council in Geneva.

“Family agriculture has become gradually feminized, with men frequently moving away from the farm in search of work. Yet the women who increasingly face the burden of sustaining farms and families are too often denied the tools to thrive and improve their situation – on and off the farm.”

While De Schutter welcomed initiatives to empower women such as quotas in Indian public worker schemes, he warned that there are multiple barriers to female participation in society which need to be addressed.

“Women will not benefit from female quotas in work schemes if no provision is made for childcare services,” he said. “Individual measures will not suffice – gender roles and responsibilities must be challenged holistically and systematically.”

De Schutter said one of the measures that must be implemented immediately is the removal of all discriminatory laws and practices that prevent women from accessing farming resources such as land, inputs and credit.

He also called for women to be relieved of the burdens of care responsibilities in the home through the provision of adequate public services such as childcare, running water and electricity. Taking care of children and fetching water can amount to the equivalent of 15 per cent of the gross domestic product (GDP) in middle-income countries, and as much as 35 per cent in low-income countries, he said.

The right to education is also vital, De Schutter said, as data shows that from 1970-1995 as much as 55 per cent of the reduction in hunger can be attributed to improvements in women’s situation in society.

“If women are allowed to have equal access to education, various pieces of the food security jigsaw will fall into place,” Mr. De Schutter said. “Household spending on nutrition will increase, child health outcomes will improve, and social systems will be redesigned – for women, by women – to deliver support with the greatest multiplier effects.”

The Special Rapporteur called on countries to actively redistribute traditional gender roles and responsibilities while still being sensitive to the constraints of women. Less labour-intensive assets such as poultry can be provided to them, he said, along with extensive asset management and social development training.

“There is a fine line between taking into account specific constraints and reinforcing gender roles and stereotypes,” he said. “Food security strategies should be judged on their ability to challenge gender roles and to truly empower women. Gender sensitivity is important, but is not a substitute for empowerment.”

Independent experts, or special rapporteurs, are appointed by the Council to examine and report back on a country situation or a specific human rights theme. The positions are honorary and the experts are not UN staff, nor are they paid for their work.