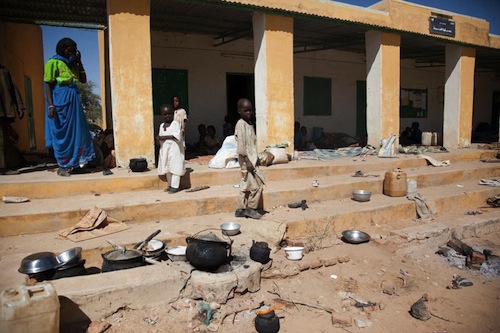 The United Nations and its partners in Sudan are providing urgent aid and airlifting wounded civilians from a town in western North Darfur, where 60,000 displaced people have already sought refuge from fighting for control of gold mines.

“Our joint priority with the Government, UNAMID and all partners in the region is to ensure the safety and security of all civilians in the area and to provide much needed humanitarian assistance,” the UN Resident and Humanitarian Coordinator in Sudan, Ali Al-Za’tari, said in a statement issued today.

The current humanitarian situation in the El Sireaf locality and in North Darfur follows an outbreak of violence on 5 January between the Abbala and Beni Hussein tribes in the Jebel Amir area of North Darfur, resulting in a mass displacement of more than 100,000 people.

UN and partnering aid organizations delivered over 700 metric tones of food and other relief supplies to the area in the last month, according to the statement.

Mr. Al-Za’tari said the deadly tensions highlight “once again” the vulnerability of civilians in the area and cautioned that more civilians will flee the area unless a lasting solution to the conflict is found.

The latest fighting has reportedly killed more than 50 people and wounded dozens more.

UNAMID said it airlifted 37 wounded people, including a woman and two children, to El Fasher for medical treatment on 24 February, and carried 2,700 kilograms of medical and other supplies.

“I call for the immediate end to the tribal clashes in North Darfur,” UNAMID’s Officer-in-Charge, Mohamed Yonis, said in a press release.

“There is no solution to this conflict other than one that is driven by good-faith efforts toward reconciliation.”

The Mission has been supporting reconciliation initiatives between the two sides and conducting security escorts to facilitate humanitarian access, and has significantly increased the number of daily patrols in North Darfur areas most affected by the violence.

“My hope is that, in the upcoming weeks, the tensions in the area will ease and the reconciliation process will resume,” said Mr. Yonis.