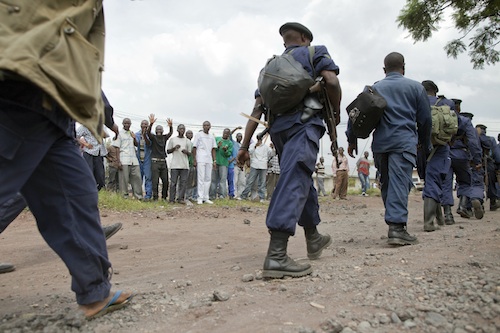 A United Nations report shows that the number of deaths in detention in the Democratic Republic of the Congo (DRC) nearly doubled in 2012, and the conditions in which prisoners live remain extremely poor in the majority of the detention centres.

The report, which is the result of investigations carried out by the UN Joint Human Rights Office in the DRC, found that in 54 civilians died in detention centres in 2010, and 56 in 2011. By comparison, 101 deaths were recorded in 2012.

Out of the 101 deaths, 24 were caused by torture or ill-treatment, a finding that the report describes as “extremely worrying,” according to a news release. The other deaths were caused by the poor conditions in the centres, including overcrowding, malnutrition, limited access to health care and lack of resources.

“Someone deprived of their liberty, should never be allowed to die of hunger or ill-treatment,” said the UN High Commissioner for Human Rights, Navi Pillay. “It is the responsibility of the State to keep prisoners alive and in good health, in accordance with international standards. The very serious and persistent problems surrounding detention conditions in the DRC need to be addressed without further delay.”

While recognizing the direct impact that the lack of resources and equipment in the penitentiary services has on the number of deaths in detention, the report placed much of the blame on the rampant corruption and lack of transparency affecting the management of prisons in the DRC.

The Special Representative of the Secretary General, Roger Meece, said the UN Organization Stabilization Mission in the country (MONUSCO) would welcome practical measures taken by the Government to remedy the situation, including the suspension of high-ranking officials suspected of corruption.

“The international community should support the Government’s efforts to reform the prison system and improve conditions of detention,” Mr. Meece said.

The report reminds the Government of its obligations to protect and take care of people in detention, and points out that it is the State’s responsibility to ensure that their basic needs are satisfied, particularly those that, if neglected, might result in loss of life.