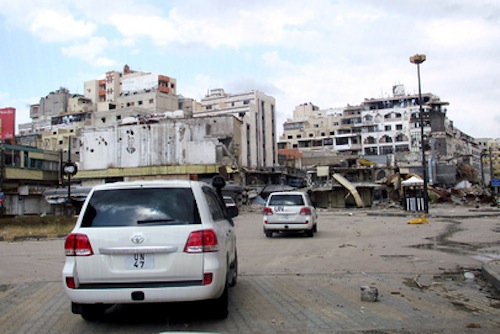 The United Nations is not packing up and going home, the world body’s top peacekeeping official told reporters in the Syrian capital yesterday, noting that the observers sent home this week could be recalled if circumstances in the country change.

“We found ourselves with too many people with not enough to do,” Hervé Ladsous, Under-Secretary-General for Peacekeeping Operations, said during a news conference in Damascus.

The decision to send half of the 300 observers serving with the UN Supervision Mission in Syria (UNSMIS) home was taken in view of the constraints they faced, particularly in terms of security, he stated, adding that the move was temporary.

“Should the circumstances change, and that is our sincere hope, then all these people will be recalled to duty,” he said.

Established by the Security Council in April, UNSMIS recently suspended its regular patrols due to the escalating violence in the country, where over 10,000 people, mostly civilians, have been killed and tens of thousands displaced since the uprising against President Bashar al-Assad began some 16 months ago.

The Council last week extended UNSMIS for a final period of 30 days. The Mission is tasked with monitoring the cessation of violence in Syria, as well as monitoring and supporting the full implementation of the six-point peace plan put forward by the Joint Special Envoy for the UN and the League of Arab States for the Syrian Crisis, Kofi Annan.

Ladsous, who arrived in Syria earlier this week, voiced concern about the reports of “very high levels of violence,” both in Damascus as well as in Aleppo, Deir E-Zour and Homs.

“We will try our best to contribute towards finding the solutions, but the solutions, especially the political solution, must exist in a framework and in a process that will be Syrian-owned and Syrian-led,” he said.