Posted on: March 9th, 2012 by AlYunaniya Staff No Comments 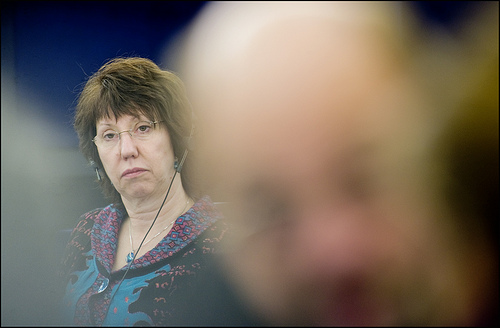 “Countries like Libya, Egypt, Tunisia, which have gone through dramatic change in a very short period of time are in search of the kind of political reforms that will give people who are prepared to stand up for their calls the freedoms that they aspire to: democratic freedom, human rights, values,” EU High Representative Catherine Ashton stressed in her speech at the Annual national Conference on Europe in Oslo.

Ashton said: “In the middle of the fighting in Libya I was in Benghazi meeting with a group of people from civil society and a young woman said to me: “We want what you’ve got. You have democracy and freedom every day, that’s what we want, but we need your help to get it because it’s more than just finishing this fighting.” And I coined the phrase “deep democracy” from that conversation which is about not just an election that can change things for now, but also about building the institutions that guarantee you the next election will take place. For me democracy is as much about throwing a government out as it is about electing a government and having independent judges – you need an administration that is not corrupt, you need police, you need the institutions that you and I live with every day but so many people do not.”

“Lisbon Treaty enables me”, Ashton said “to bring together for the first time the military commanders who are in charge of the boats that actually stop the pirates or pick them up; the people who work on making sure we can prosecute them and imprison them; the leadership of those countries most affected so they own the issues for themselves; support for the United Nations in trying to get security; the people working on development in Brussels who are able to support civil society via NGOs in the region. All of that brought together in one strategy and I say that for the Sahel region as I say it for the Horn of Africa.