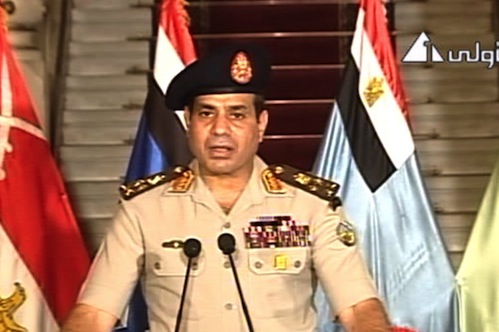 The Egyptian army has overthrown the nation’s first freely elected President Mohamed Mursi, saying that Mursi had failed to meet the demands of the masses of people.

In a televised statement on Wednesday by Army chief General Abdel Fattah al-Sisi, he announced that the constitution would be suspended, and early elections would take place.

The general, who had issued a 48-hour ultimatum to Mr. Morsi on Monday to respond to resolve the political crisis in the country said the president’s defiant response in a televised address on Tuesday had failed “to meet the demands of the masses of the people.” And calls by the armed forces for reconciliation.

The general’s announcement came after the armed forces had deployed tanks and troops in Cairo and other cities where pro-Mursi crowds were massing, according to Al Ahram English news website.

Mursi will be replaced by the chief justice of constitutional court, Adly Mansour. He will be sworn in on Thursday.

Shortly before the army’s announcement Mursi remained defiant that his presidency was still valid and refuseed to bow down to what he called an illegal coup.

Ahmed al-Tayeb, Grand Sheikh of Al-Azhar, Cairo’s ancient seat of Muslim learning, and Pope Tawadros, the head of the Coptic Church, both backed the army’s decision and made brief statements following the announcement, Al Jazeera reported.